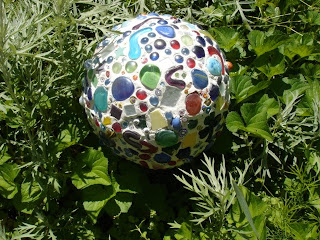 My one of a kind gazing ball...made out of a bowling ball! I covered it with premixed adhesive grout from Lowes and covered it with an arrangement of glass marbles, ceramic tiles and mirrors. It makes a unique statement in the garden. 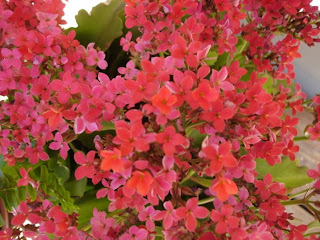 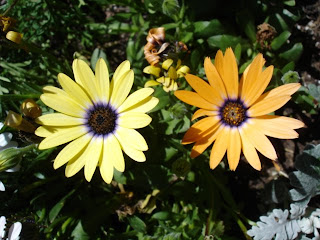 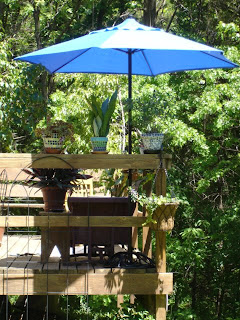 Perfect spot for reading the Sunday paper...quiet and shady. Hopefully soon, the moonflower vines I planted will climb up the trellis and make more shade. 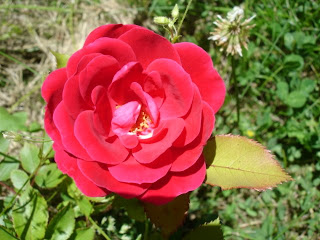 Knockout roses are the best.... 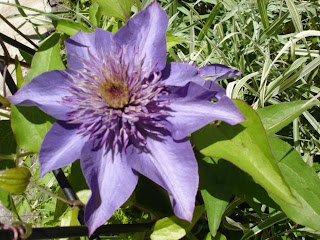 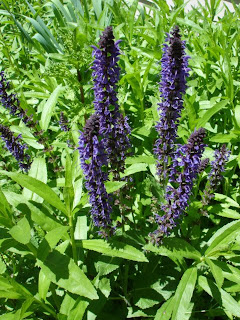 I think this is salvia...perennial and they are so easy to grow! 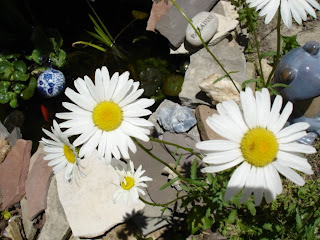 Posted by Unknown at 7:10 AM 2 comments: Links to this post


Elena loves my water garden...she leans over and tries to touch the fish...she jumps when frogs jump in...very cute!
Posted by Unknown at 7:52 AM 1 comment: Links to this post 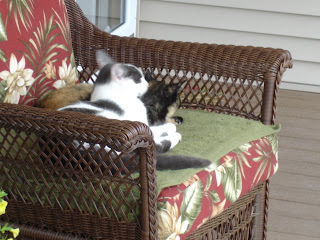 Greetings from the front of the porch...the cats love to sit on the great wicker chairs...the cats have adopted the comfortable chairs as their own. 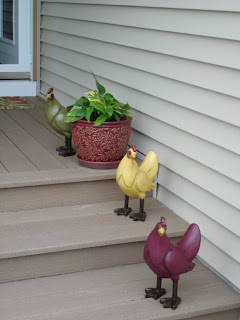 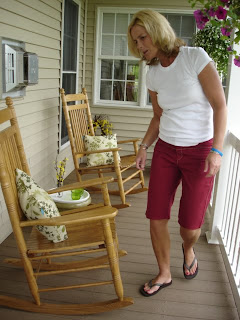 and Jane fluffs the pillows on the other side of the deck. The wooden rockers are welcoming. Recently they had a huge storm and the pillows were picked up in neighboring fields. 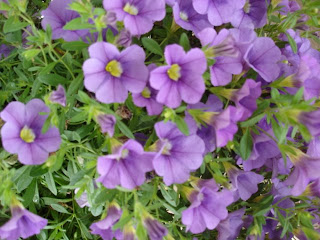 I can't remember what kind of plant this is, but it looks like a petunia. The color is even more vibrant in person than in the photo. 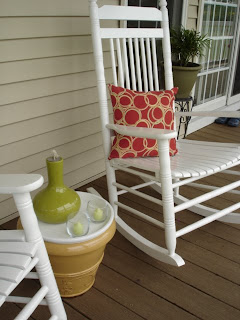 Note the table made from a large pot with a saucer sitting on top of it...Jane got this idea from the This Young House blog (http://www.thisyounghouse.com/2009/04/the-big-bhgcom-front-porch-reveal/) and I must say it is a great little table for the deck. 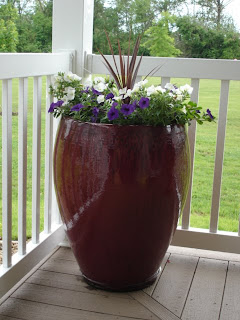 I loved this urn planter, running over with with beautiful plants. 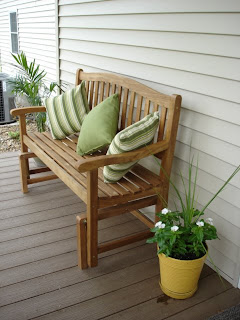 Such a calming oasis! 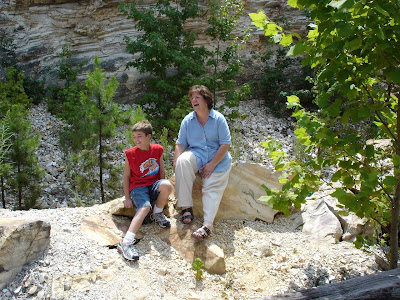 I gave this speech on Mothers Day 2002 as testimony for Mothers Day services at church. In January 2002 I had torn my Achilles tendon, so I had been off work and in a wheelchair for an extended period of time.
Sam was 8 when I wrote this and he was 9 in the picture above from our vacation to Hot Springs, Arkansas.
Things haven’t been easy for me the past few months. The whole world looks a lot different from a wheelchair and the electric carts that you find in grocery stores and Wal-Mart. Stairs have never looked so difficult, and running has never looked so appealing. Walkers and canes and casts aren’t all they are cracked up to be! I have always known that I make a better nurse than a patient.
But, I believe things happen for a reason, to open your eyes to a new frame of mind, to put you in someone else’s shoes.

When my son was born 8 years ago, I remember thinking that things would be perfect, that everything would go as planned. I was not prepared for a sick baby, for not being able to hold my son whenever I wanted to, for not taking Sam home with me when I left the hospital.

I was accustomed to taking care of other peoples kids…I do that for a living. But I never really considered what it felt like to be on the other side of the crib. I was aware that most new moms cried a little and some new moms cried a lot. I always offered Kleenex with the first tear, and I patted a lot of shoulders and offered encouraging words. But I always wondered what was so hard for these moms.

When it came time to leave the hospital without my son, I was inconsolable. Nothing had prepared me for leaving Sam there, to be cared for by nurses who I knew and also trusted, but who didn’t know Sam.

I managed to get though those few days. I realized there are a lot of moms who never get to take their babies home, who never are able to hold them in the night and look at them in wonder, count toes and fingers and marvel at the very miracle of life created within their own bodies. There are moms who have babies who know they cannot take care of them, who give their babies away to be loved by another woman. And there are moms who open their arms to welcome someone else’s baby as their own. There are foster moms who keep children safe until their own moms can take care of them. There are single moms by choice and single moms who never planned to be single and there are married moms. Every one of these moms has a special story.

Becoming a mother sheds a whole new light on things. Nothing can really prepare you for the uniqueness of it all. I don’t know what I did before my son was born. I had time to do anything I wanted, to pick up and go places, to walk out of the house in a second, without diapers, a change of clothes, wipes and a supply of baby food for a week. But my life was also empty in a way I didn’t know that it was empty, I didn’t know what it was like to be greeted with a smile at 4 am just because I was his mom. I didn’t know what it was like to pull smashed worms out of little jeans pockets, to hold a child who believes I can fix whatever problem he has.

I hope I can always fix Sam’s owies and teach him how to love God and take care of himself and be a good person. I hope always to have his unconditional love.

I have done lots of things after I became a mom that I would not have envisioned myself doing. I made a home for a mouse Sam pulled out of the mouth of a cat; I have picked up frogs and gotten up at 4 am to watch a meteor shower. I have pitched a million balls and have yelled at ballgames, I have waited patiently outside men’s bathrooms, and occasionally not so patiently, have opened the door and called my son out. I have watched over him while he was sick, I held him when he needed comforting, I have answered a million questions.

I will never get tired of being a mom, it is a blessing from God, something that I greatly treasure.
I hope Sam always keeps the wonder he has now for the world and life. I hope he stays well and happy and safe. I hope he loves God and his country and that he grows up to be a good man. And I hope he always loves his mom.

Happy Mothers Day to all women who are mothers, who dream of being mothers, who are soon to be mothers and those who are taking care of other's children.
Posted by Unknown at 5:33 PM 4 comments: Links to this post 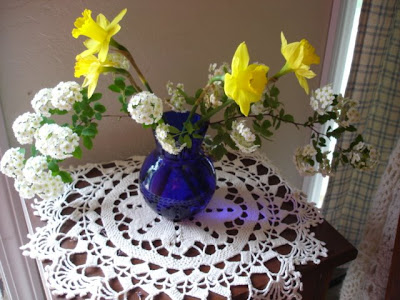 I just had to have a bouquet of the last daffodils of the spring...I have a small clump of late blooming daffs. Paired with a few sprigs of spirea, they make a pleasing sight.
My mom crocheted the doily the vase sits upon.
Posted by Unknown at 6:23 PM 1 comment: Links to this post

A fresh coat and the merits of mint.... 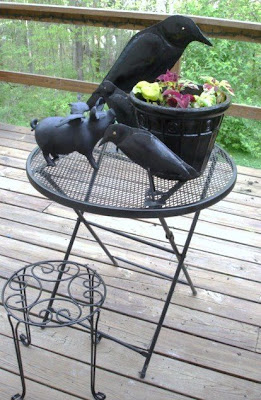 A good coat of black paint makes every thing look so fresh and clean. I put a light coat on my crow trio and my flying pig that I put out every spring and they look good as new. I also sprayed the metal tables and I love how fresh they look.

I also covered a lightweight flowerpot (not plastic but one of those fiberglass ones) with a coat of gloss black. I was thinking about tossing it as it had areas where the original paint was off, but now I am glad I didn't. My coleus look great in it. 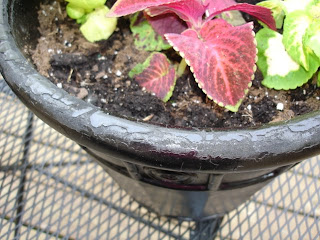 Even the gazing ball base and the door mat got a fresh coat... 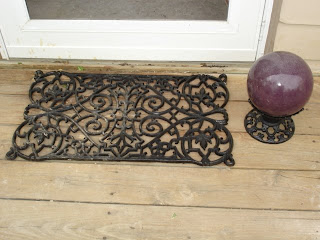 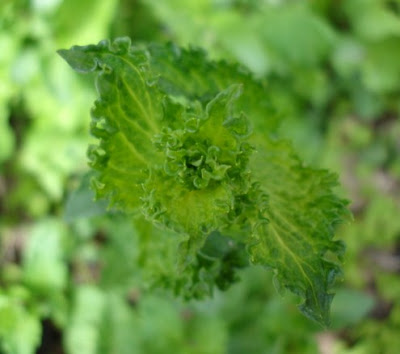 And now on to the merits of mint...I wish I had never planted this stuff!

Now I find out that the "plant is invasive and should be grown in pots or in lengths of plastic pipe buried in the ground". It has infiltrated my flower bed and has even sent runners underneath the deck sidewalk to the other side of the flower bed. The smell is nice and fresh, but it sure can take over a garden or flower bed in a flash. I have been known to stomp on a clump for the pleasant aroma and to eliminate just one plant...but it never seems to make a difference.

My friend Nancy can testify to the invasiveness of mint...
Posted by Unknown at 5:58 PM 1 comment: Links to this post

Frosty getting in on the action....

I have been getting the "itch" the last few days to do some planting...
Probably around six weeks ago I planted my seeds indoors, lining all my windowsills, awaiting their germination and growth.
I have moonflower vines, coleus, purple bells, bush cucumbers, a lonely zucchini, lots of blackberry daylillies, zinnias, sunflowers, black eyed susans, and probably a few more that I can't think of right now. 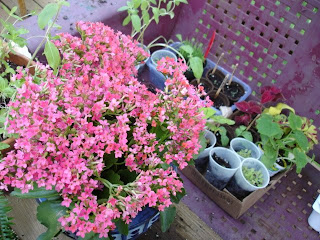 I planted for a few hours, very carefully since I have recently had back surgery.
Frosty my favorite cat (until last week when he tore open the last screen in my house at 1:30 am and made me think the house was being broken into by an axe murderer), assisted me the only way he knew how, by being cute! 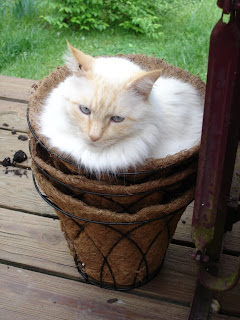