Mom and I spent some great time at the Steamboat Arabia Museum in Kansas City yesterday.  I have been there before, but it had been a while, probably 8 years and I wanted to see it again.  It’s a work in progress, so things had changed a bit.  I took tons of pictures so this will be a picture rich post! 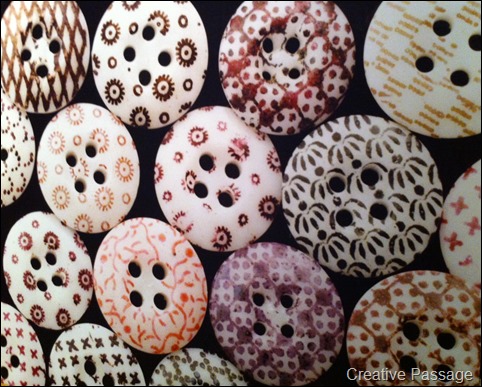 These buttons were originally on cotton dresses, but the cotton deteriorated over time.  When the crates were open, there were strands of color in the mud from the dress fabric and these buttons. 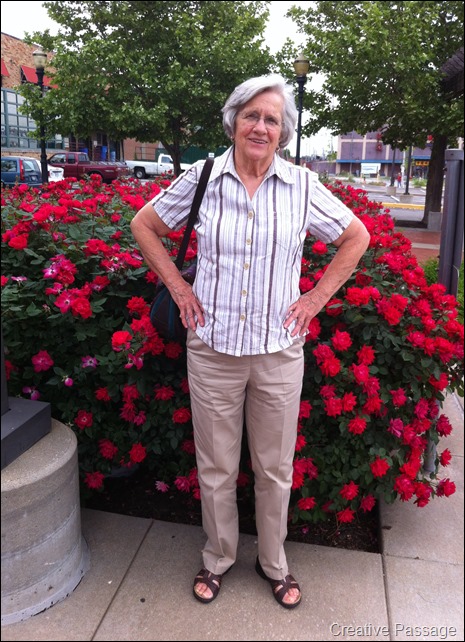 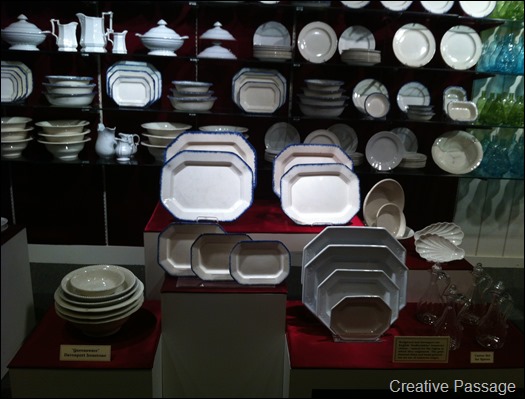 On September 5, 1856, the Arabia set out for a routine trip. At Quindaro Bend, near the town of Parkville, Missouri, the boat hit a submerged walnut tree snag. The snag ripped open the hull, which rapidly filled with water. The upper decks of the boat stayed above water, and the only casualty was a mule that was tied to sawmill equipment and forgotten. The boat sank so rapidly into the mud that by the next morning, only the smokestacks and pilot house remained visible. Within a few days, these traces of the boat were also swept away. Numerous salvage attempts failed, and eventually the boat was completely covered by water. Over time, the river shifted a half a mile to the east. The site of the sinking is in present-day Kansas City, Kansas and excavated remnants have been removed to a museum in Kansas City, Missouri. 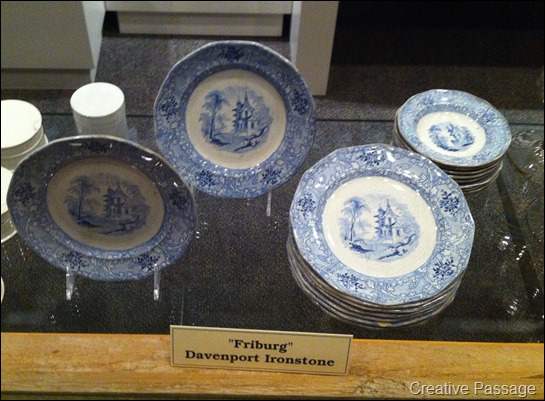 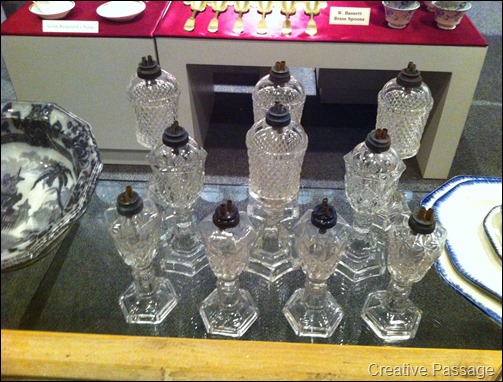 It carried boxes, barrels and crates full of supplies needed by the folks building their lives on the frontier.  Many towns depended on regular deliveries by steamboats up the river for supplies and sundries.  In fact, many of the little towns waiting for supplies folded up before winter started as they had no supplies for building, keeping warm, eating. 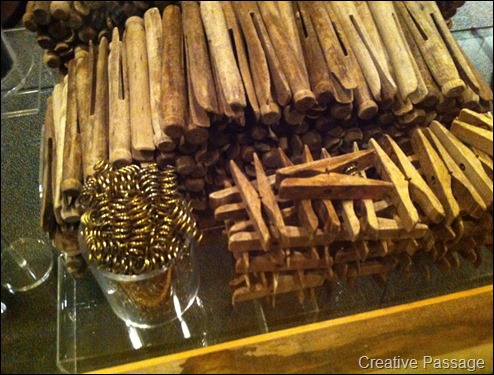 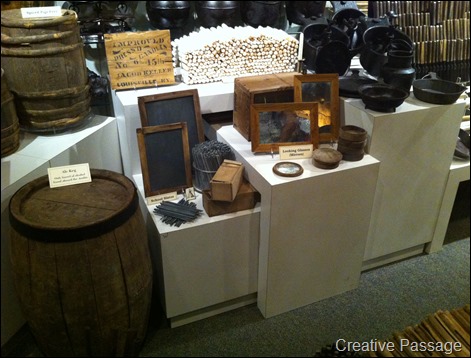 kegs for food storage, tools to build with and cut down trees for homes… 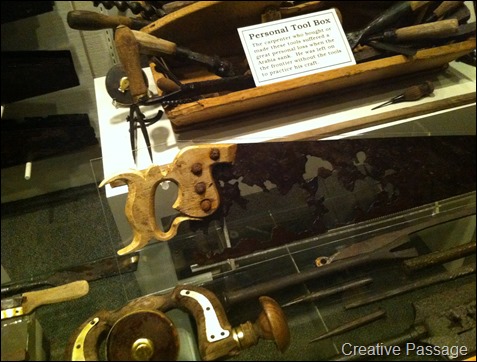 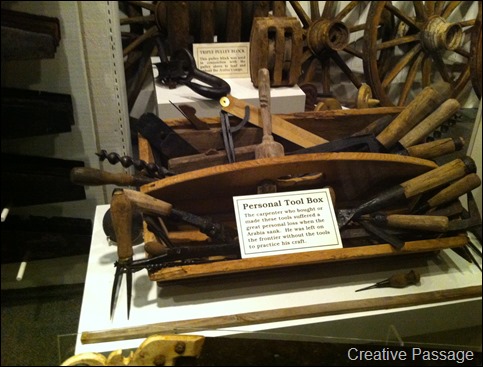 saws of all varieties, 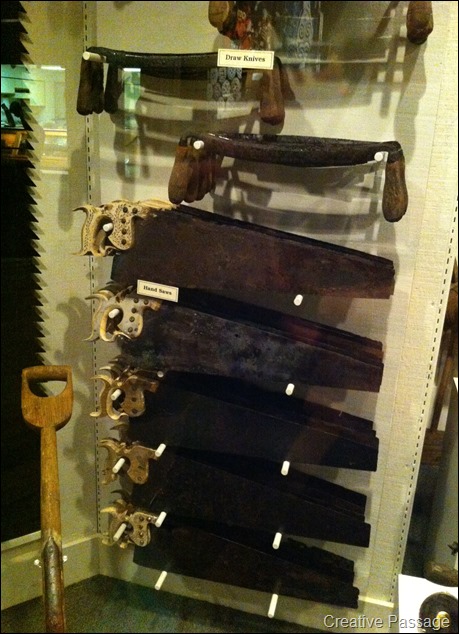 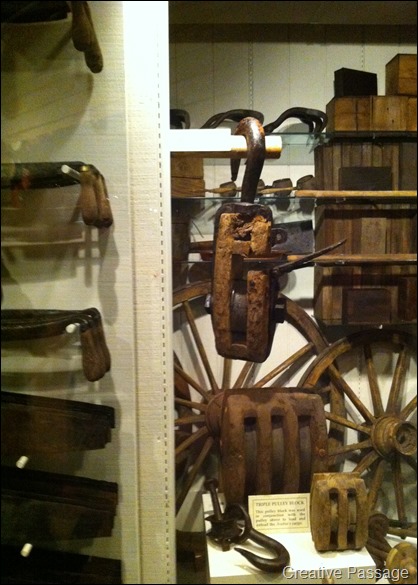 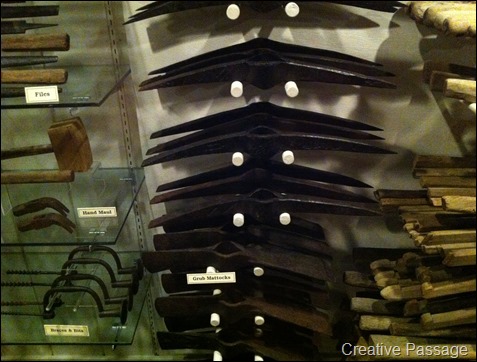 When the wood was removed from the boat which had been covered by silt for 132 years it had to be soaked with an agent to plasticize it so it didn’t collapse, as all the cellulose in the wood had deteriorated over the years and if the artifacts were allowed to dry out the wood just collapsed into a flat piece of wood. Flat enough to go into an envelope. 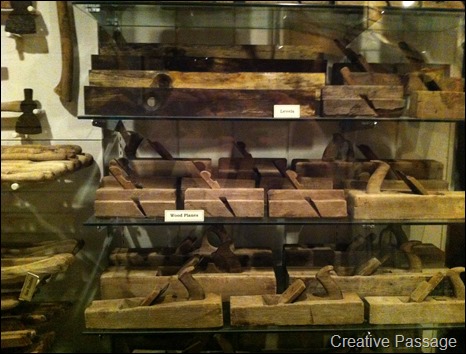 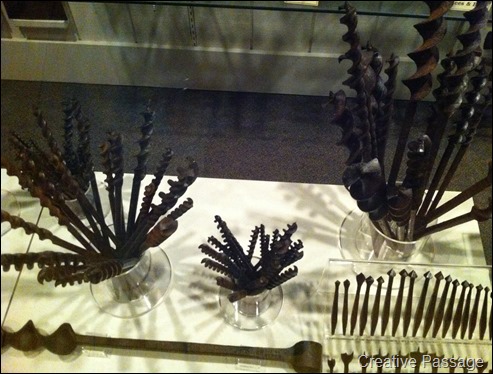 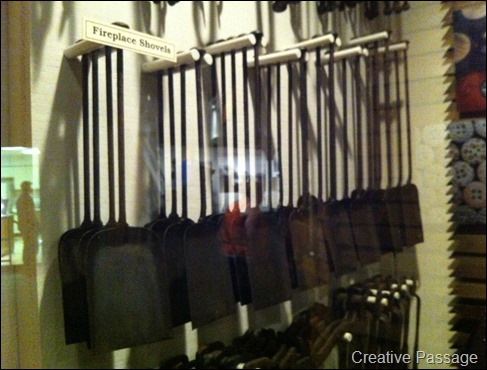 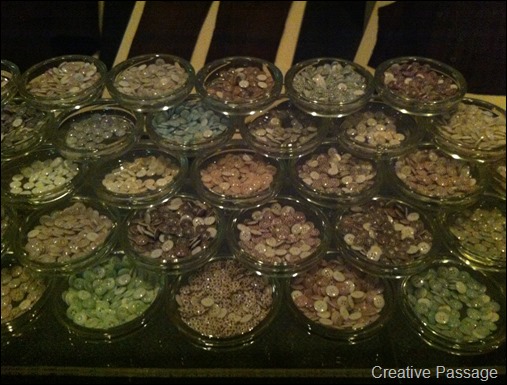 Anything wool survived, cotton did not…even the cotton thread in the shoes had disintegrated and the shoes were sewn back together with new thread as they were restored. 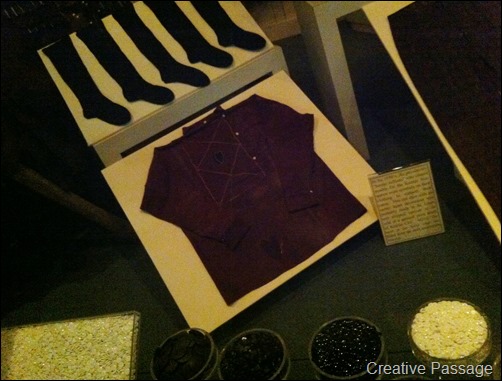 Stockings, shoes, shoe buttons, wool tunics and coats were abundant.  Remember this boat was supplying for the long winter ahead. 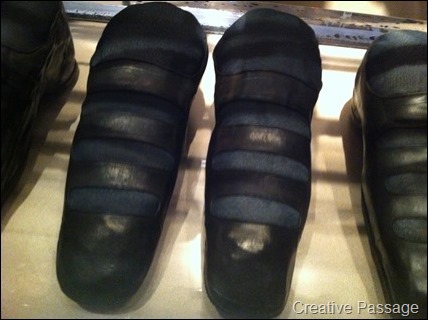 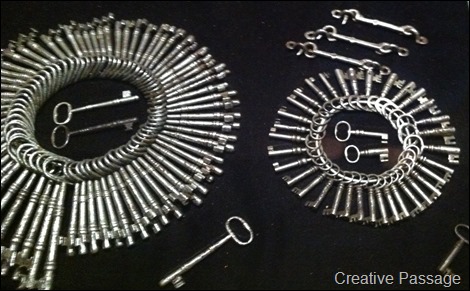 of all materials and shapes and sizes, some fancy some plain...I wanted to take those home with me! 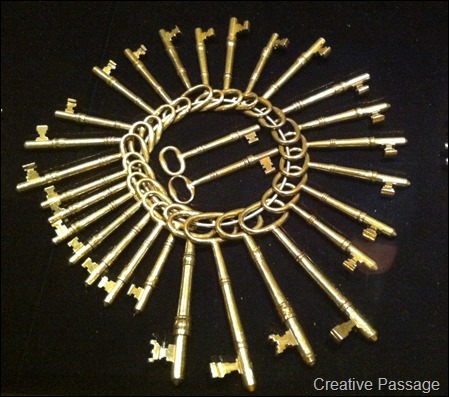 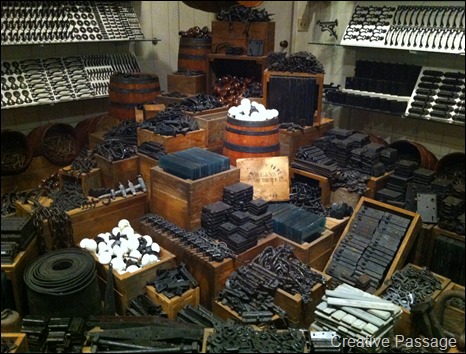 hinges, plates and screws were found by the buckets full.  Remember when these were found in 1988, they are covered in layers of silt, looking like they have been dropped in buckets full of cement. Every little nail, every little hair pin has to be “excavated” to allow it to be restored and preserved. 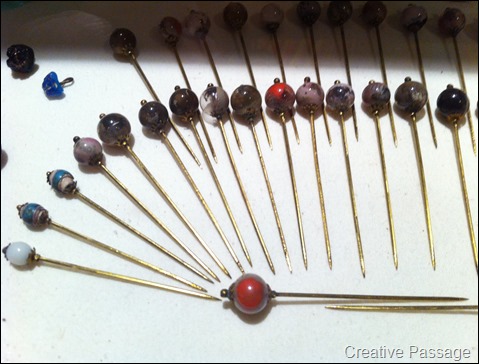 There were hat pins…beaded pins 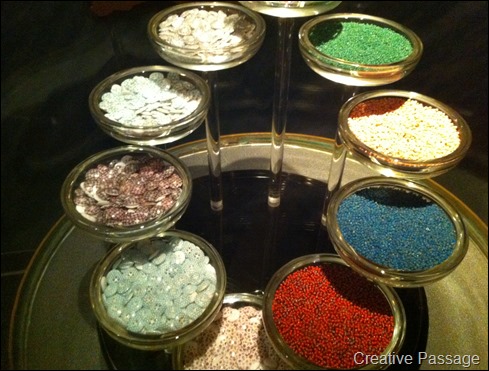 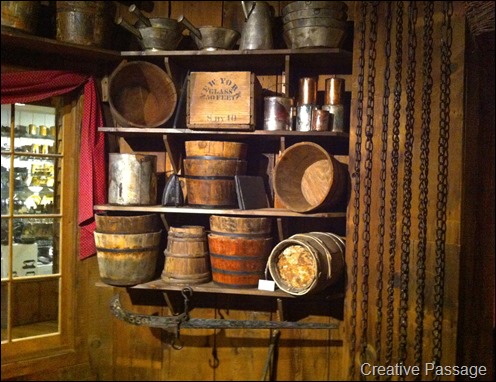 chains and buckets and barrels, 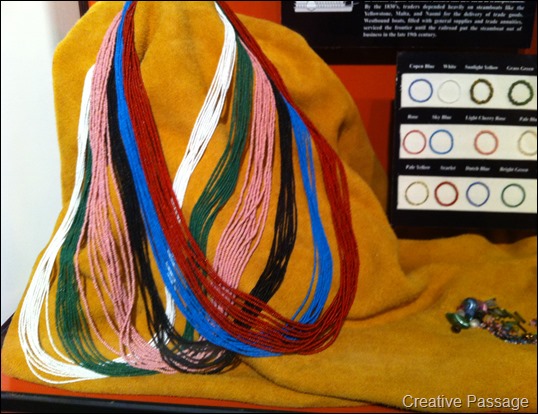 and beads used for trading with Native Americans. 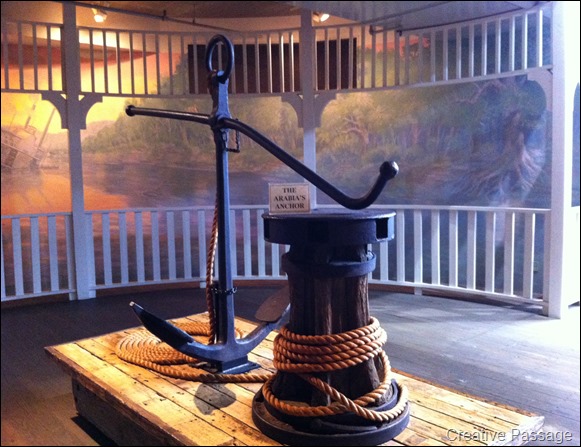 The anchor and the boilers were raised and brought to the museum. 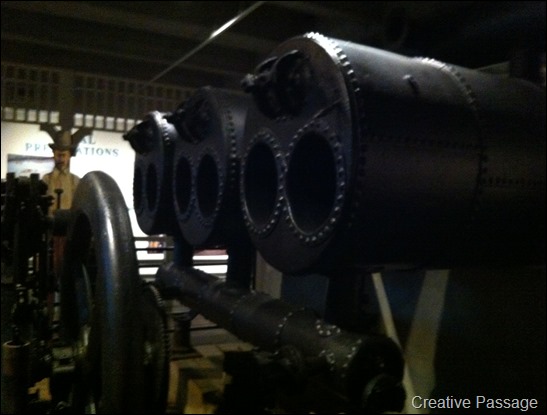 Mom and I had a wonderful lunch at Windsor’s BBQ after the museum. 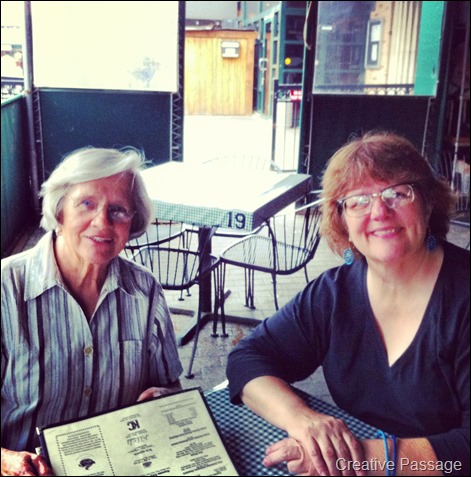 If you are interested in more about the Arabia, go to the museum website www.1856.com or buy the book Treasure in a Cornfield which tells all about the dig and what they found.

Posted by EllensCreativePassage at 9:22 AM

Adorned From Above said...

Love this museum. Everything is so beautiful.
Debi

Looks like you and Mom had a fun time, too. Your friend, Linda

It looks like you had a great time. This museum looks wonderful. I would like to visit some day! Thanks for sharing your day.

Wow what a collection! I love that it is grouped by items and not all just piled together. Thanks for sharing!and linking up with me :)