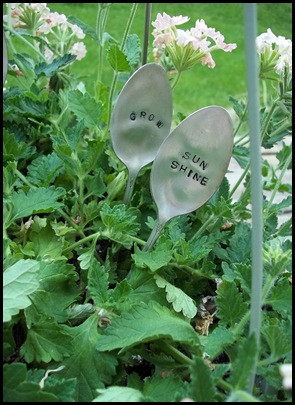 I love the metal stamping projects I have seen around blog land.  I ordered myself a set of stamping tools (I got the 1/8” but think I would get a larger size if I had it to do over) from Harbor Freight Tools for less than $10. Let me just say, it is not as easy as it looks.  Much practice later, I felt like I could actually make something other than practicing on washers. 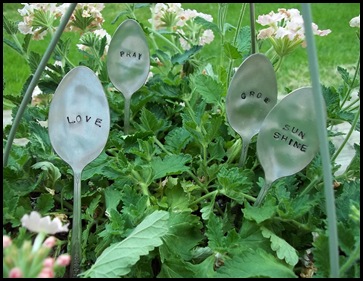 So here’s what you will need for this project:
Stamping tools, hammer, stamping metal block (so you have a hard surface upone which to pound), old spoons (I bought mine on etsy for a bit of nothing—they are silverplate), black permanent marker, paper towel for wiping and a strong man boy to pound the spoons flat (mine just happened to be 17 years old). 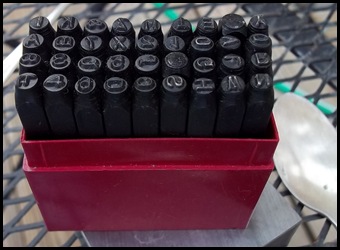 Pound those spoons flat.  You will need to protect them to prevent them from getting scarred from the hammer or surface underneath. 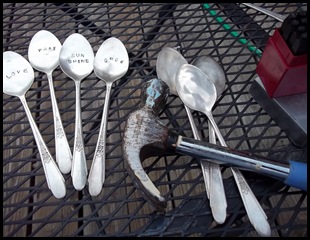 I think the pounding is definitely the hardest part.  See the spoon on top below?  It was pounded first, with a hammer against a flat rock.  Kinda sounds like cave man material huh?  After that one, I wrapped the others in an old towel and we pounded them out in a more protected manner. 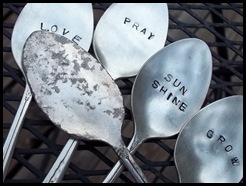 So then stamp the word on that you want…anything goes!   The word is pretty light so you will want to take the black marker and mark right on the letters.   See the Pray spoon below…I had just marked over the word with the marker.  The Grow spoon has been wiped clean, just enough so that you can still see the word. 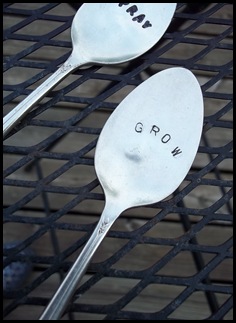 That’s all there is to it!  Now stick them in a plant or even in a vase of flowers!  These spoons are a great way to personalize a bouquet for someone special too! 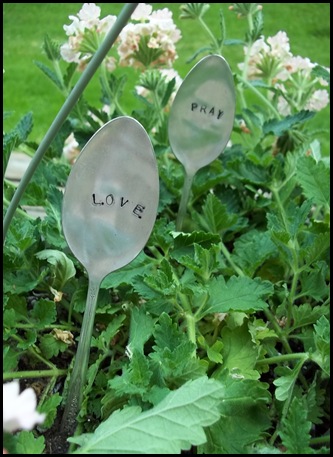 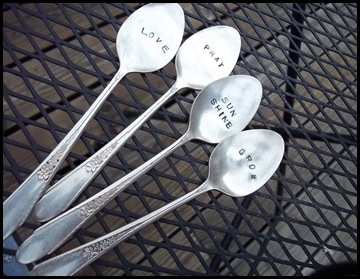 I am linking to these parties…
Ellen
Posted by EllensCreativePassage at 9:05 PM

Okay I really love this cute idea! My husband and I just planted our first garden and I have been wanting to find way to show off what is planted where. So I am bookmarking this and going to do it!

This is GREAT!!! I love the idea!! Thanks so much for sharing!!

Those are adorable!!! I think my flowerbed needs a few of them. Time to break out the stamps again. Thanks for the inspiration.

Adorable! Stop by and link up!Love to have this great project added--
Mary

This is fabulous! They look so much cuter than the plastic sticks. Thanks for sharing!

Perfect! I am definatly going to try this. I'd be perfect for the herb garden I'm doing in my kitchen. Harbor Freight rocks. :) When I get 'em done, I'll put it on my blog and credit you.
www.DavisDomestications.blogspot.com

Carrie at In the Hammock Blog said...

these are so beautiful! i've been wanting to try stamping like this for awhile. sounds like flattening the spoons is a little tough!

In the Hammock Vintage

I love this idea, they look fabulous :o) Scarlett x

Great project idea! I have to see if my DH has stamps like this in his tool haven...

If you have a moment today, please share this with my readers @Creative Juice Thursday Hope to see yours among all the amazing projects!

I might have to splurge on the stamps to make me some of these. I'm so excited about the garden at our new home this year. Thanks so much for the inspiration!

Love the idea! I've just planted some tomatoes and chilli peppers but we always forget which ones are which! I like it that the spoons are waterproof too!

I love these and also bought the 1/8 size from Harbor. I couldn't get the stamps to be upright always and pound hard enough to make a good impression without losing my place...eeeck. I want to do these, any more tips? thanks for linking up with VIF!! xo Debra

Love this Idea, I know how hard it is to pound the spoons flat, years ago I had an idea to do that with an Old spoon, then curve the hand down & use as a handle ~ let's say I quit a "1"
Thanks for Sharing, Hope you stop by~
Cheryl

I would love for you to come link up your post at my "Encouragement is Contagious!" linky party! And... please link up some of your other favorites from blogs you love! Then, those bloggers will also get lots of unexpected, encouraging comments!

Thanx for sharing the "tute" on the spoons...I have the letter kit and a 16 yr old that should be able to help me. Tiff...visit me over at my blog The Cranky Queen

These are awesome! I love the idea. So glad I stopped by from Encouragement is Contagious.

These are adorable! I have got to get me a set of those stamps from Harbor Freight!

Saw you at Everything But the Kitchen Sink. Hope you can come say hi at my little blog when you get time!

Those are soooo cool! and you do not have to worry about not being able to read them as the summer goes on AND you can use them over and over! score!!

these are so cute! I have linked it up to my linky laundry list post this week. I really like them! You can find it here - http://literallyinspired.blogspot.com/2011/05/linky-laundry-list-2.html

these are so cute!! I ordered some stamps online but didn't really pay attention to the size, they are so small!! i need to get some this size so i can make cute projects like this :)

Thanks for linking up to Your Whims Wednesday!

I really like this idea, it would last longer than other type garden markers plus they look much nicer. Thanks for the info on where to get the stamps and the sizing.

I love this idea. I bought those little letter things last summer and haven't used them yet. I can't wait to make these! Thanks!

I'm sitting on a set that's BEGGING to be used. My next day off work will see me in a stamping frenzy!

I love them. And thanks for telling us about where to find the stamping tool. I had been seeiing them around blogland also and was not sure how it was done. Thanks for sharing.

I love it! I was just pondering what to do with marking which of my herbs are planted where, and this will be so much better than just writing with permanent marker on the side of the planter... {;0) Thanks! Visiting from the me making do linky party!

I so need to make these!

These are so cute. I've always wondered how these were made.

Visiting from the the "Encouragement is Contagious" linky party at my blog, "Only A Breath"! I hope your week is a wonderful one!

these are great ~ love them!

okay I am in love with these! I saw some on etsy and wanted to know how they did it. thanks for posting. I really think I might try this.

This is such a fun idea...I'm going to try these for our giant garden boxes we are planting this week!
liZ
(simplesimonandco)

That's awesome! What a great way to do this yourself. I'm so glad you included directions. Ha! Love them.

Love these. They turned out wonderful. What a fun way to dress up the garden!

Such a great idea! Thanks for joining us and sharing with us this awesome post at the Creative Bloggers' Party & Hop :)

I loved your markers so much I featured them on this week's Ten Buck Tuesday! Email me at youngnester(at)gmail(dot)com to get the code for the "I've been featured at Young Nester" button! Have a great week :)

I LOVE these!!! My husband and I just started our little potted garden indoors. Once we transfer our plants outside, this would be such a fun idea to dress up our pots!!

I made these last year however I had trouble with the marker...did you wipe it off with any solution? Or justwipe quickly? I like the words you used (rather than the names of plants)...great job!!

These are SUPER cool! LOVE them. I've never tried a metal stamping project. I think I'll put it on my list! Thanks for sharing, I'm your newest follower!
~Heather

Found you over at DIYbyDesign's party. These are adorable. Another thing going on my list of projects to do someday.

Love this idea!! I've been wanting to buy a set of stamps and this would make a great first project. Thanks for sharing! :)

Love them!!! Thanks so much for linking up. You did a great job!

At The Picket Fence said...

Your hard work paid off because those are just adorable! Thanks so much for sharing them with us at Inspiration Friday this week~
Vanessa

These are on my long "to do" list. Thanks for the tips on how to make them!!!!

Adorable !!! What a cute craft! I am visiting from Tatertots and Jello and I would LOVE if you could link up your awesome post to my very first crafty linky party! This is the first week of Delicately Constructed Fridays and I would really appreciate the link!
Hope you have a great weekend!
Michelle
www.delicateconstruction.blogspot.com

I love this idea! It would be super cute to label your crops with these. Great job!

Really cute idea. I saw you on Weekend Wrapup! I just bought some iced tea/soda spoons that are extra long that these would be great for. You did a great job creating an informative step by step tutorial.
Jacqueline

I Love these! I have been wanting to make these for a while now, thank you for sharing!

What a great idea! I just bought a set from Etsy for my sister's wedding. Nice to know I can now make them on my own.

These are soo adorable.. Love all the little simple words you used for each spoon. Such a clever lady! Thanks so much for sharing with the Pink Hippo Party!

Those are cute little plant markers! I featured this too in my gardening post today, come on over and take a peek!

Your spoons are so cute.

I love your spoons! I just tried to make a spoon necklace for my daughter but can not make a good impression with the stamp. Do you have any suggestions? I am wondering if certain spoons might be softer than others. Also, what did you hammer on?? Thanks for any help you send my way!

Okay I really love this cute idea! My husband and I just planted our first garden and I have been wanting to find way to show off what is planted where. So I am bookmarking this and going to do it! -Lindsay Delighted Momma