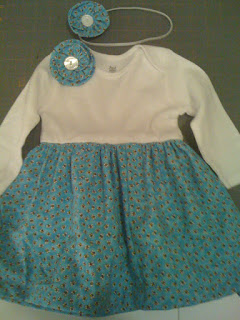 I saw a tutorial on Prudent Baby for making a dress from a onesie.  I had an extra onesie left over from a Christmas gift for my great niece Miss Audrey Lou.  So of course, I had to try it.  I have this cute bumble bee fabric and thought  it would be perfect. 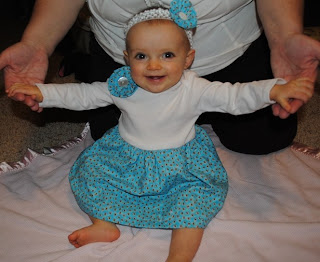 And since accessories are everything, I decided to add a matching headband.  After I finished the headband, I thought it would be cute to put a similar flower on the shoulder of the onesie.  Now, I do have to say that making the dress was a bit harder than I thought it would be. 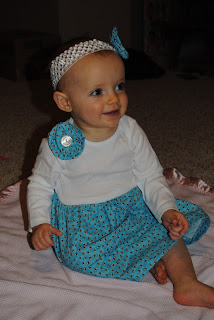 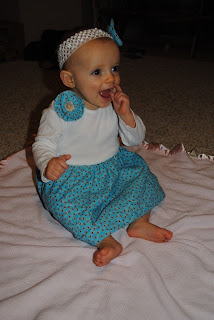 But as you can see Audrey doesn't mind at all and I am telling myself that it really isn't too noticeable. 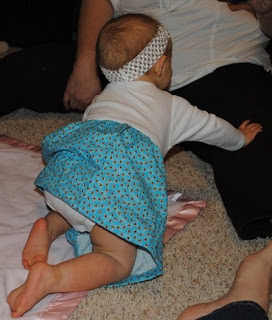 The tutorial is great and making the dress was not hard.
I think it took Audrey's mom Liz and I longer to get these "action" shots of Audrey than it did for me to make the dress! 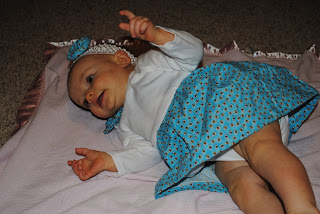 It's a great idea because it has the diaper cover built in! 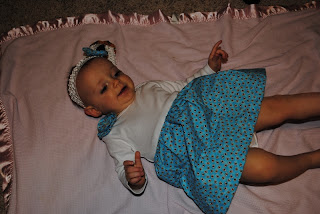 This kiddo can't hold still for even a minute! 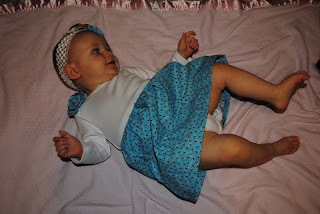 I couldn't decide which type of headband to use, but eventually went with the wider elastic lacy one... 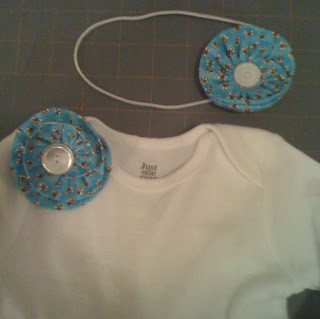 Isn't she the cutest baby model ever??? 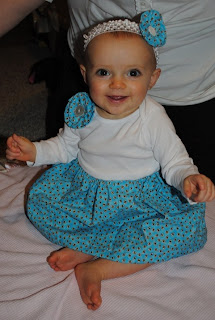 While we were taking these pictures, Audrey's big sis Laney had a major meltdown because I didn't make her a dress like Audrey's.  We tried to explain this dress was only for babies, but Laney continued to howl...until I reminded her that I had brought her a "princess dress" (a fancy pink and black party dress from Goodwill) a few months ago and didn't give Audrey a princess dress.  Then she was fine, although she did need to sit on my lap for a while and get lots of hugs.
Don't forget to enter one or all of my five giveaways...winners will be announced February 1st!

Posted by EllensCreativePassage at 4:38 AM

oh my gosh! You did such a fab job, I wonder if my boys would mind wearing a dress!?

She looks darling! I wish I had your talent :)

That is so cute! I wish I had a reason to make one! All of my friends are having boys!

What a cute dress, and Audrey is adorable! Thanks for linking up!

Very cute! I have been thinking about trying to make one of those to use as a baby shower gift.

That looks great! I love this idea and the floral embellishment to the top and the headband really make for a cute outfit.

Oh, this is just darling! Your little model is just precious. I have a little 10 month old grand daughter and I have got to do this for her. Thanks for the inspiration.
be a sweetie,
Shelia ;)

How gorgeous!! And you're right, she doesn't mind where the seam is at all!!

Thanks so much for linking to A Round Tuit!
Hope you have a great week!

Well shucks...that is now one more thing to add to my sewing list! We are having a baby girl in March and that is just too cute!

She's adorable! I'd love for you to come link up at Inspire Me Mondays @ Singing Three Little Birds!
http://singingthreelittlebirds.blogspot.com/2011/01/inspire-me-mondays-2.html

So cute! Thanks for sharing!

So cute!!!! I am your newest follower! I hope you will come join me! Brooke
brookedouglass@yahoo.com
Girl Boy Girl Inspired

This is sooo cute! If only I had a little girl! I am going to share this with a friend who does though! Thank you for sharing!!!

That is really cute! You did an awesome job! By the way, I'm your newest follower. Come follow me, too, if you like my stuff:)

this is so adorable!!! i have a new little one that would be too cute in a dress like this.

so cute! I wish I had a little girl to make one for.

This is too cute!!

Great job!! I LOVE the flower accent on the top of the onesie to match the headband.

cute blog! I am your newest follower! Please feel free to stop by and follow me as well! I think you will like my blog. Have a great one! :)

Adorable! And yes, she's one cute model! thanks so much for sharing on Craft Schooling Sunday!

She IS the cutest baby model ever and that onesie dress is adorable, too! Thank you for sharing with air your laundry Friday!

Sweet! The dress is so cute, but of course the model is the cutest!

So sweet! That dress is cute and she is even cuter! Thanks for linking up to Mad Skills Monday!

Oh, she is the CUTEST baby I've ever seen! A perfect model! What a cute dress for her to wear! She definitely looks like she's enjoying it! So cute!

p.s. how do I enter these giveaways???

Ellen, the dress looks absolutely perfect to me, and I love the floral embellishments! Those were the types of dresses I used to LOVE putting my girls in when they were little. Wish I had made some back then! Hmmmm...perhaps I'll have to give it a shot for my little niece! Thank you so much for inspiring me to dust off the ol' sewing machine, and for always linking up and sharing such wonderful projects at "A Little Birdie Told Me..."Tuesdays at Rook No. 17! Best, Jenn