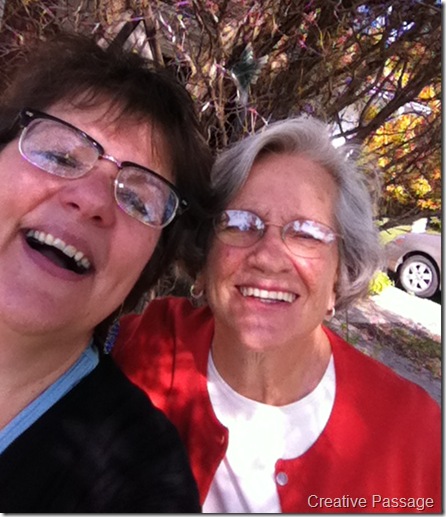 Mom and I took a vacation together again in Connecticut this year.  Last year we took the New England bus tour from Hades but there was so much that we didn’t get to see on the tour that we wanted to go again and see what we wanted to see! 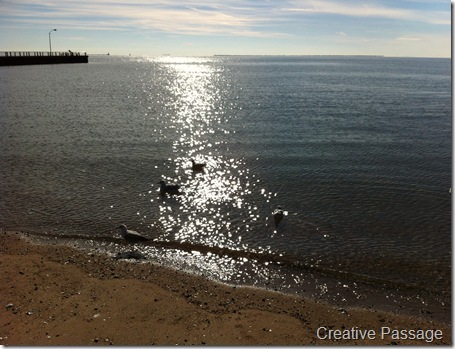 Well, this was mostly what I wanted to see, so we headed out to the beach the first morning.  That was my reward for driving us in a rental car out of LaGuardia Airport in NYC!  I drove out of there at 11pm like I knew what I was doing!  Eight lanes of traffic going one way!  It was crazy (what was I thinking???).  But no one died in my efforts to get onto I-95 and into Connecticut!  We were honked at with wild abandon, but hey that is nothing! 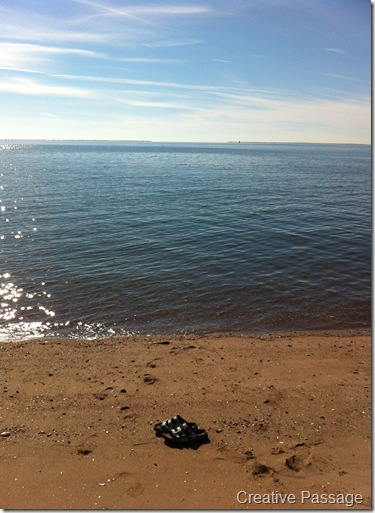 My shoes came off and I walked in the surf!! 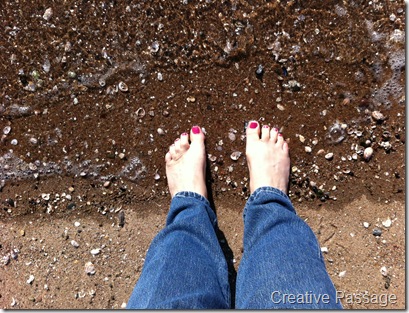 I just love the ocean… 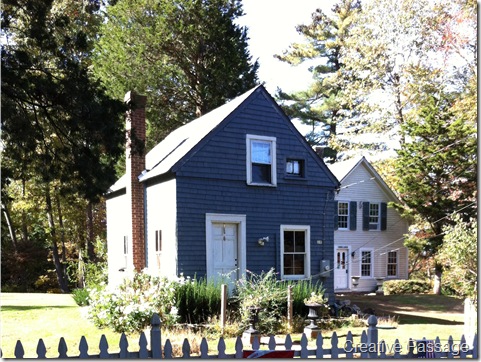 We drove past the little cottage where my parents started their marriage 55 years ago…it sits empty and strong right where it did when my parents lived there and where my older brother and I were born. 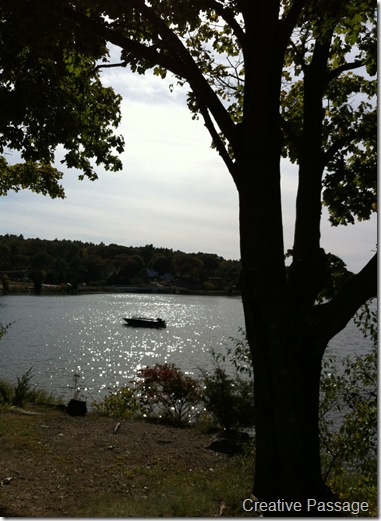 Walked around the little cove area in Ledyard.  We saw the same man walking his German shepherd that we saw a year ago at this park!  Talk about coincidence!  We spoke to him and he remembered talking to mom about the store that used to be there when she lived there years ago. 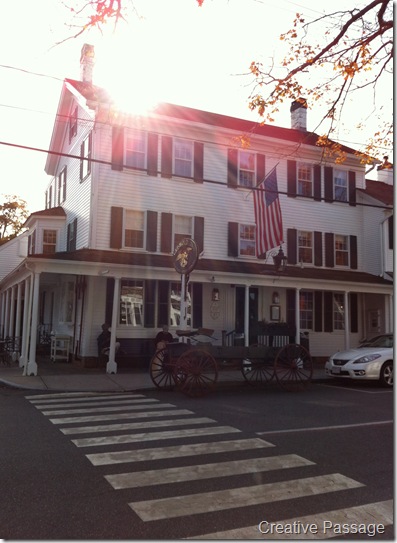 One of the oldest continuously operated inns in the country, The Griswold Inn (or the “Gris” as locals called it) opened its doors for business in 1776 and has been catering to yachtsmen and overland travelers ever since. It is situated in the historic hamlet of Essex which is nestled on the banks of the Connecticut River and that’s where we had our lunch. 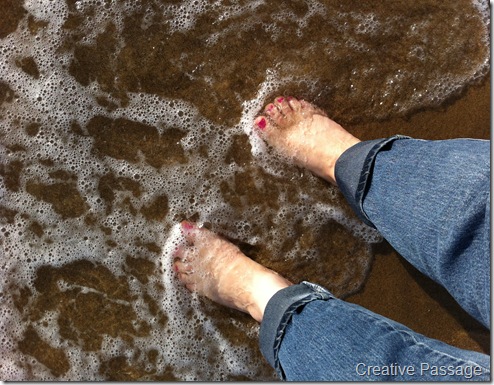 Another beach trip to Hammonasset State Park where yes, I played in the surf again but we were blessed to see this awesome sight… 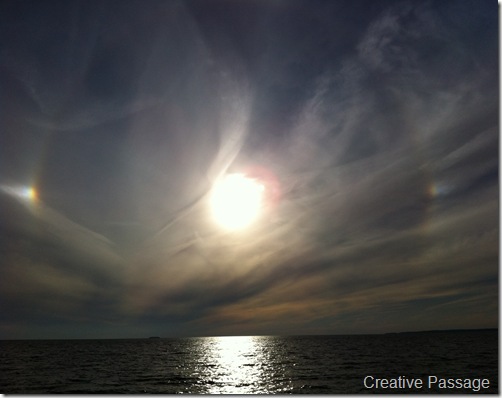 a complete rainbow circle around the sun!  Hard to see it all in the pics, but we could see the bottom portion too!  Incredible! 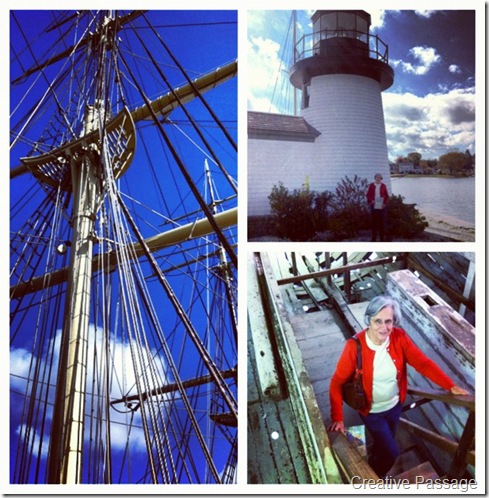 A trip to Mystic Seaport in Mystic followed by 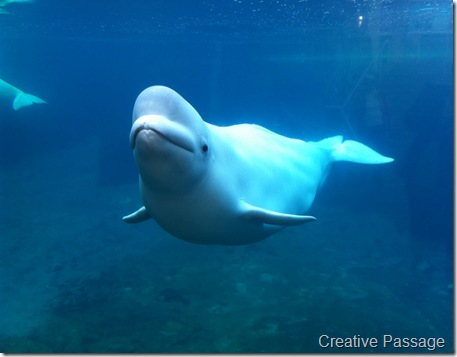 a visit to Mystic aquarium, where we met this guy, Juno, a 1200 pound Beluga whale who was quite charming! 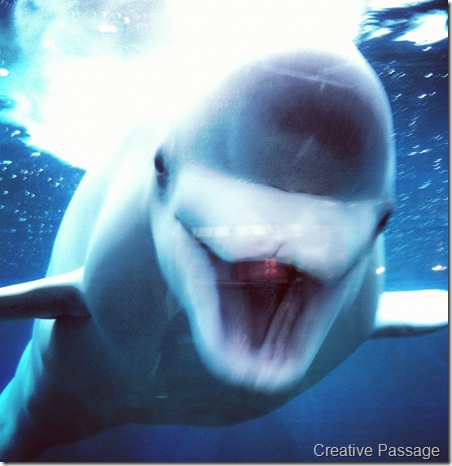 He thought we were ignoring him and he did this to get our attention. 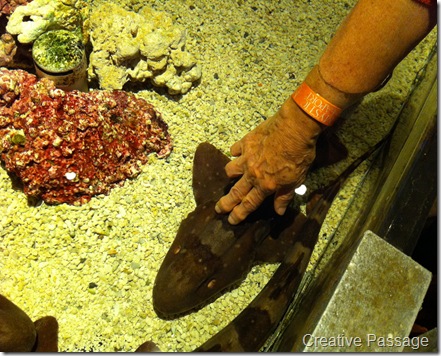 We petted a shark (OK, so it was small shark, but it was still a shark!) and a stingray, 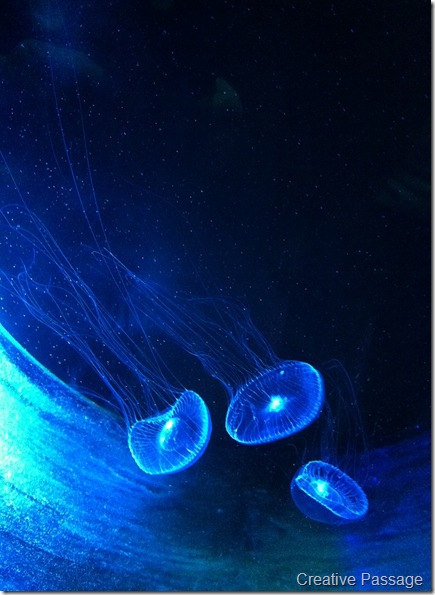 we were amazed by the jellyfish that are fluorescent, and 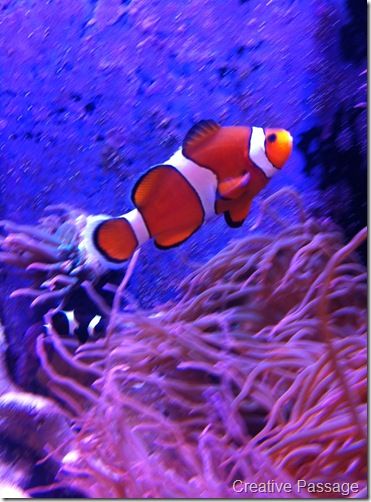 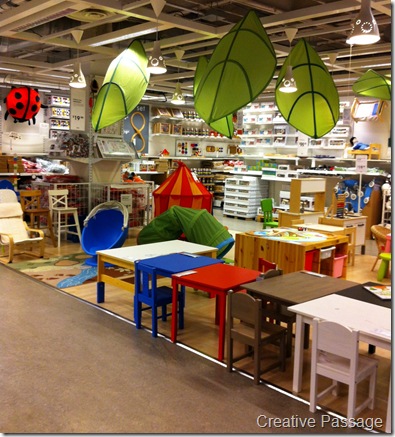 Retail therapy included a trip to IKEA (my first trip ever) 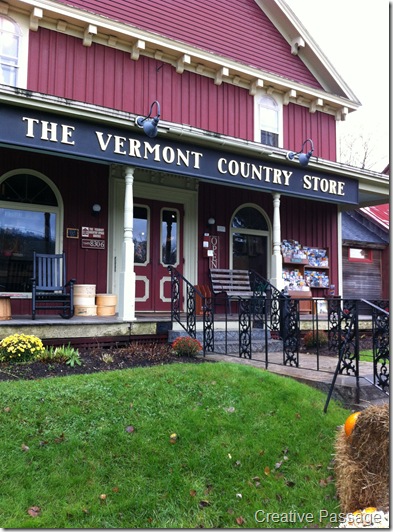 And a jaunt up through Massachusetts into Vermont to go to the Vermont Country Store! 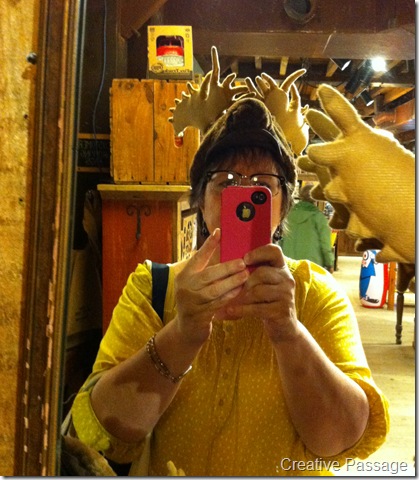 I thought this moose head hat was perfect for me! The store was awesome and we made quite a haul! 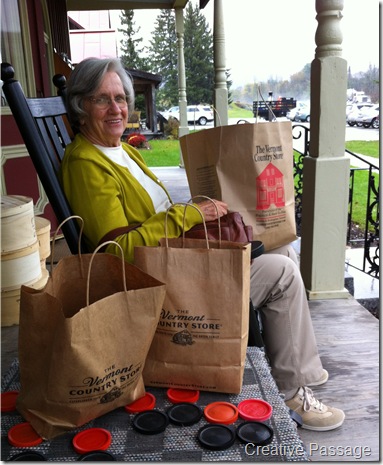 Maybe, just maybe we went to the beach again… 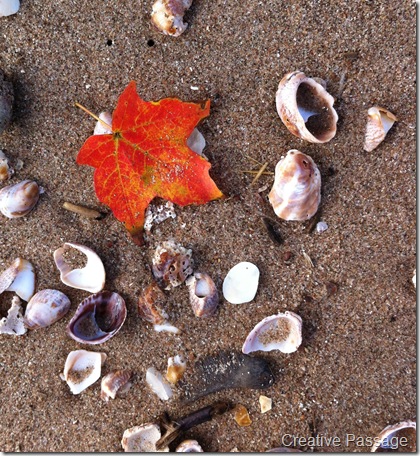 The weather was great and we only had one rainy day when we drove to Vermont. The trees were beautiful colors too! 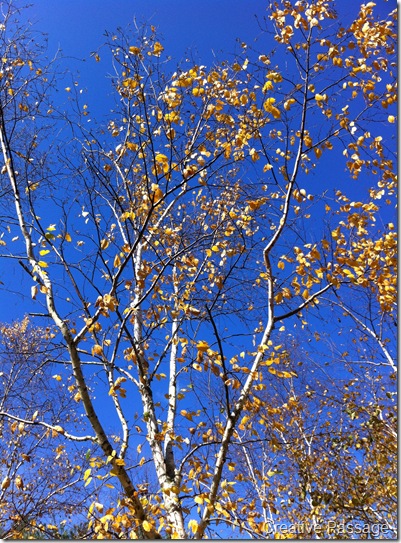 We went to the USS Nautilus Submarine Museum on the New London Sub Base. 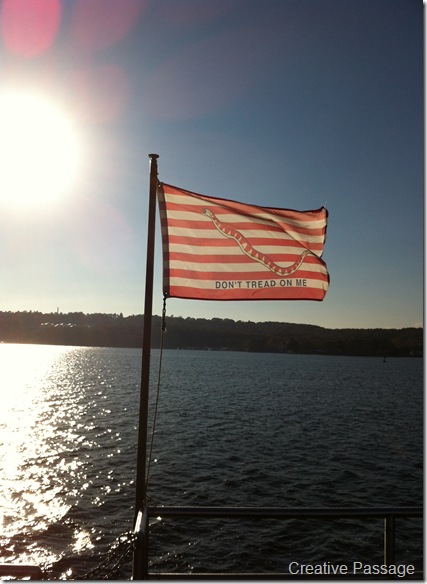 The Nautilus was the first nuclear submarine ever…came into service in the late 1950s. 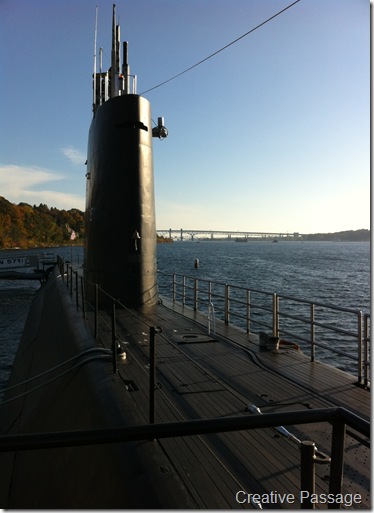 We could walk onto the deck and even go underneath… 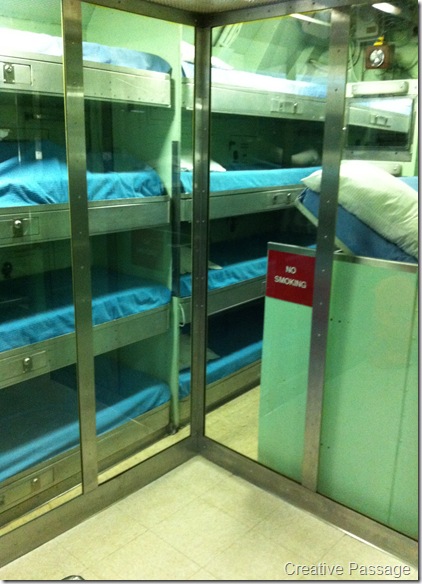 We climbed down narrow stairs, walked down narrow paths, and scrambled through hatches that were quite smallish.  Somewhere along there I realized I couldn’t quite catch my breath and I felt like the walls were closing in, this was the only pic I got as I felt an uncontrollable urge to get the heck out of that tight space!  Whew!  I can’t imagine sleeping on the bunks in the picture.  These poor men would be submerged for up to 60 days.  I would have to be sedated! LOL! 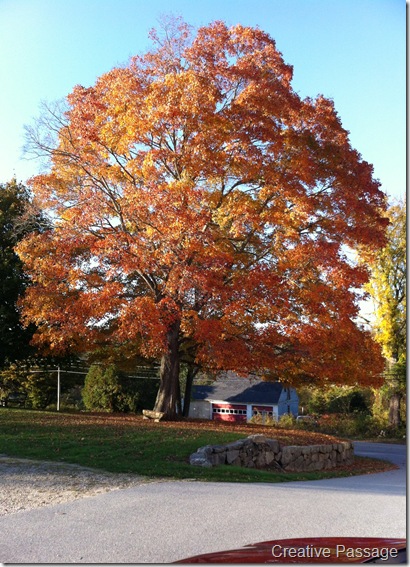 Another beautiful tree we stopped near to regroup and figure out where we were going and how to get there.  Thank goodness for the GPS on my iPhone! 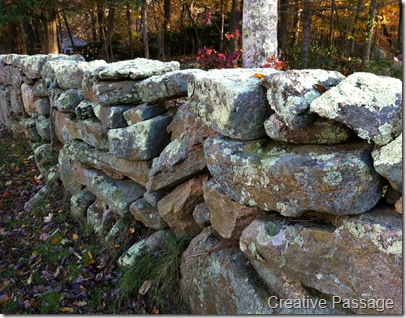 The stone walls are everywhere…lining the roadways and pastures. 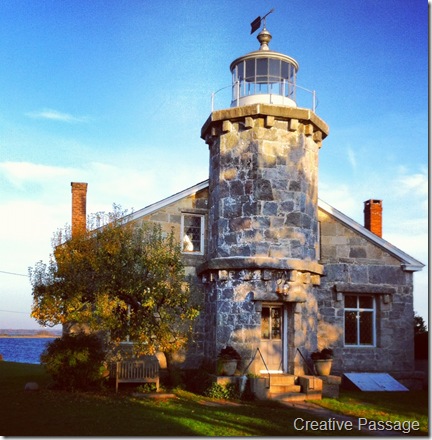 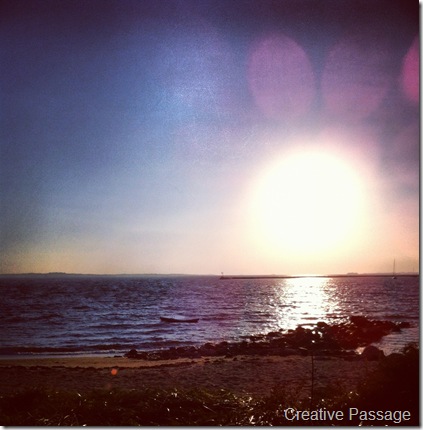 I even asked a complete stranger to take a pic of me by the ocean. 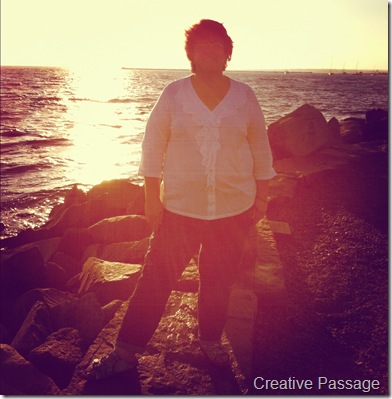 It was so great to get to spend this much time with my mom all to myself…we laughed so much and had such a great time!  And by the way, I did not drive us back to the airport, we dropped our car off in the town where our motel was and we took a cab into the airport!  That was so much easier!

Posted by EllensCreativePassage at 7:50 PM

Found you on Sew Many Ways.
Looks like a fabulous trip! I'm always fond of other people's trip through the US, seeing gorgeous places to visit. They are an inspiration for future travels for ourselfs!! That Vermont Store looks beautiful! Love all those kind of old stores. Ikea, not so much ;-))
Also great to take such a lovely trip with your mother. Making memories together is always great.
Bye for now and 'till another time! Bianca (the Netherlands) of Quilts, Cats and Automobiles.