I do love to torment pamper my cat Frosty…so here is his new Halloween costume!  Frosty is a different sort of cat…he doesn’t like the other cats, he still, after 6 years, hisses at Rachel the dog, and he doesn’t like my son.   Here he is trying on his new sweater. 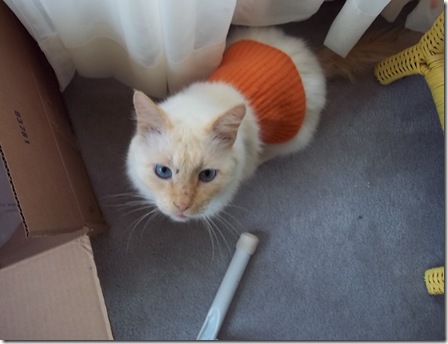 But me, he loves…that wasn’t always the case because the first time he met me it was hate not exactly love at first sight.  I dated Frosty’s original owner six years ago…the first time I met Frosty at his house he attacked my purse with wild hatred!  And it was a very nice pink leather purse, brand new! 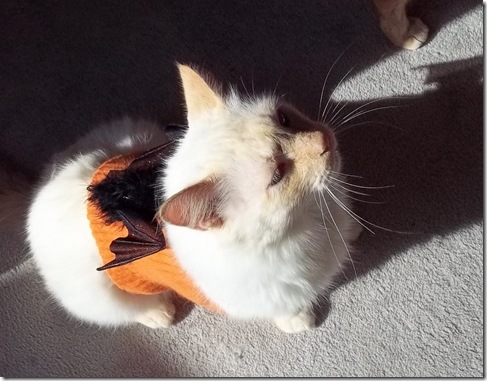 Frosty was abandoned as a kitten, then he lived a solitary life with a single man, my friend Ralph for a year or so.  Then Ralph suddenly died and Frosty didn’t have a home.  Ralph’s kids couldn’t keep him and I hated the thought of Frosty going to a the Humane Society, because, well, Frosty was not a social animal.  In fact he was downright cranky and not happy. 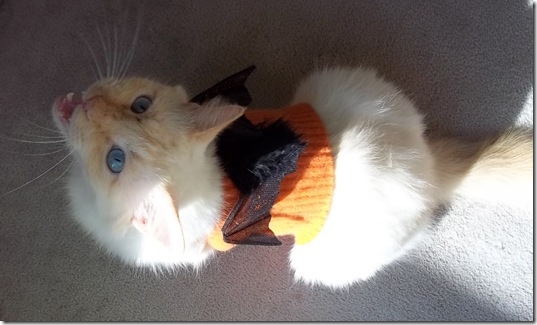 When I brought him to my house, he hid for two weeks, first in the woods, then in the garage, then underneath my bed.  I would see the occasional glimpse of him, but he wouldn’t let me hold him and he wasn’t eating that I could tell.  And he didn’t have outdoor cat survival skills, so he needed to be in the house. 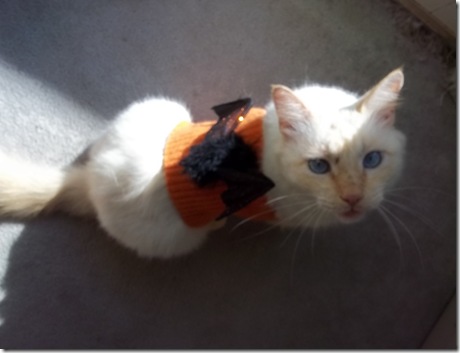 I called my vet, described the situation and explained that I had not been able to catch him.  My vet only makes house calls, so he came over and we trapped Frosty underneath my bed.  Frosty chewed up Dr. Frank’s arm and scratched and bit him.  Dr. Frank trimmed his nails and we put him in a crate so I could give him some medicine to calm him down and so I could monitor his eating. 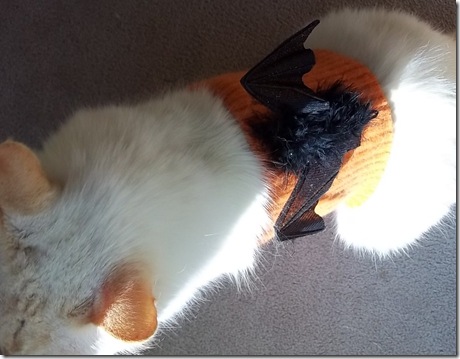 Isn’t this so cute on Frost?  I thought the bat added some extra bling!  And it sort of matches his personality. The sweater was made from a machine felted wool turtleneck sweater and this is the turtleneck part!  The bat clip I got at Michaels for $2.99–40% off of course! 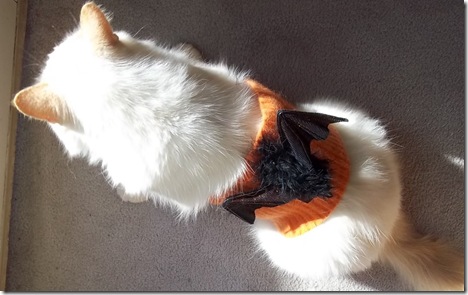 Well, back to Frosty’s story…Dr. Frank prescribed him some amitriptyline which is a human antidepressant.  I drug him out of the crate that evening, gave him his first dose, and tried to love on him but he would not have it!  So back into the crate he went.  I fed him baby food first meats-lamb of course-and the first day he didn’t eat any of it.  The next morning I saw the food was gone.  That afternoon, I took him out to give him his medicine and he didn’t fight so much.   A few hours later, I heard a noise from the crate and Frosty was purring!  And he was making eye contact with me! 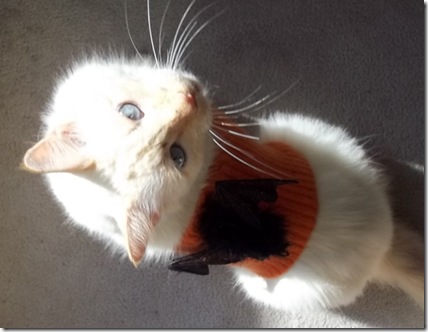 With some hesitation I let him out of the crate and he started rubbing against my legs, making figure eights around my feet.  He purred and purred!  Now this cat hardly ever leaves my side, even though he loves to go outside, he always wants to come back in the house. 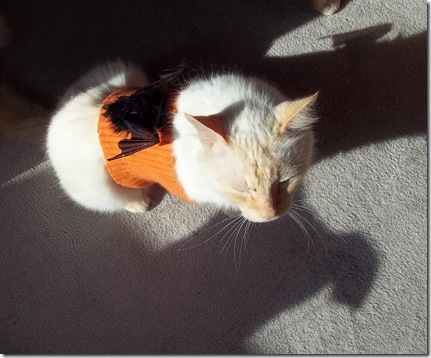 See Rachel’s head shadow in the bottom of the picture?  That’s about as close as she comes to Mr. Frosty!  She is terrified of him for sure!   I need to start working on Rachel’s costume…in the past she has been a ninja, a ballerina, a chick…gotta think of something different!
I am linking up to these great parties!
Ellen
Posted by EllensCreativePassage at 1:04 PM

What a lovely story about Frosty the Cat...I am so pleased that he is feeling better and how kind of you to have given him this chance! The sweater is absolutely lovely, super funny of course, i had to laugh...anyway I guess he is all set for Halloween!

i burst out laughing reading about frosty....he is a fiery little feline!! i love him. didn't know he was ralph's kitty...makes him even more special.

That's awesome! I wish my cats would wear a sweater!

LOL at your kitty--not sure what he thinks about the sweater, though!
Thanks for your comment on my blog!

I don't think my cats would ever wear a sweater but this is a really cute idea! thank you so much for linking up to Upcycled Awesome!

I don't think my cats would ever wear a sweater but this is a really cute idea! thank you so much for linking up to Upcycled Awesome!

That is the most hilarious thing! A cat with bat wings. Ha. Thanks for linking up with DIY under $5!

What a cute post. I'm not a cat person, but kudos to you for giving Frosty a chance at a good life. My favorite picture is the last one with Rachel's shadow. I guess that picture sort of sums up their "relationship". Thanks for the giggle!!

That is a GREAT STORY! And I am of course, a cat person. (I don't understand why people feel the need to say they hate this animal or that animal when reading a nice story about one!) I have two cats and a dog. I like all animals. Not crazy about bugs, but who is?

My cat is crazy in a different way. He walks on a leash, plays at the dog park, and goes to PetSmart! LOL There are pictures of him on my blog, do a "control f" for cat or toulouse or tootie or cats and click on the post keyword and the posts should pop up. There are pics of him walking around petsmart on a leash on there. lol

Lol if only I could get my cat Breeze to wear a costume. I had to force a hat on him last halloween! That was such a cute story about Frosty! Maybe I can sneak a costume on him during deep sleeping, he's currently snoring as I type this haha. Cute costume and Frosty is working it!

I clicked on your link from Marvelously Messy because I couldn't believe someone got their cat in a sweater and was pleasantly surprised by a great story. Thanks for sharing and for making your cat an awesome bat sweater. My cat wouldn't take 2 steps if I put a sweater on her, she'd lie down and refuse to move until I took it off her. You've got a special cat there - I'm so glad you guys found each other. >>^..^<<

Ooops! Sorry about that! I didn't know that "I'm not a cat person" = "I hate cats"... let me rephrase: I can't have a cat because cat dander causes me to have an asthma attack and not being able to breathe is problematic, not to mention the costs involved in trips to the E.R... What I should have said was "I'm not a licorice person". hehe Still, thanks again for sharing the cute story :)

I love the story... And the sweater! I was not a cat person at first... But my "Shadow" changed that! He's a special cat as well, with some health problems, so we're so close to each other now that lots of people are wondering if he's a real cat or a dog! I'm going to talk to him about the sweater idea (yes, i do talk to him...)