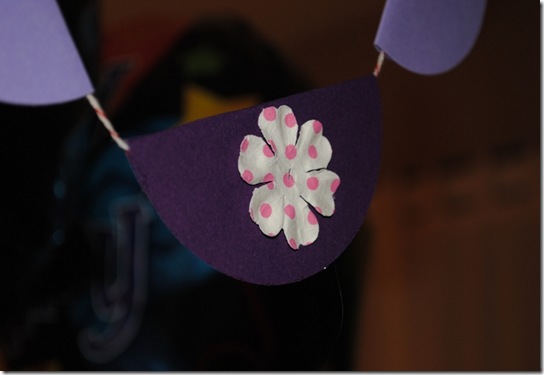 My niece Liz, who swears she is flair-impaired, asked me to make some decorations for Audrey’s first birthday party.  I jumped at the chance to make a garland… 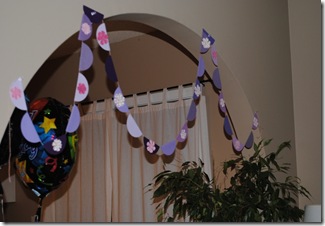 You can see the tutorial below…I used purples because Audrey’s cake was purple.  The pink flowers I attached to the front of the garland. 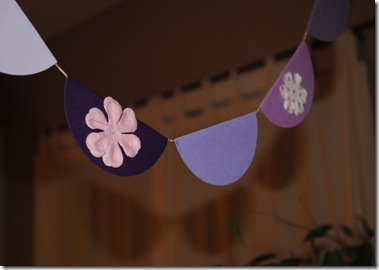 Not nearly as cute as this, the birthday girl who was awakened a tad early for the party!  She had to do a bit of blanket snuggling on the floor before we got started. 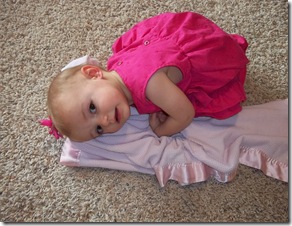 Her big sister immediately asked me if she could play games on my iPhone so she was in a great mood!!  Plus she had a great audience of aunts, uncles, grandmas and grandpas….
I made Elena’s dress (you can see the project here) from a woman’s small ruffled tank top and a t shirt top.  She loves it! 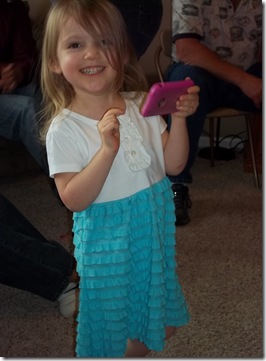 Miss Audrey sure make a dent in her own personal cake!  She pretty much decimated it in very sort order!  That is the bottom of the cake liner you see in the middle of the cake.  She ate that much!  And that was after a ginormous amount of food at dinner. 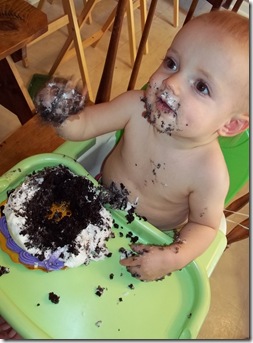 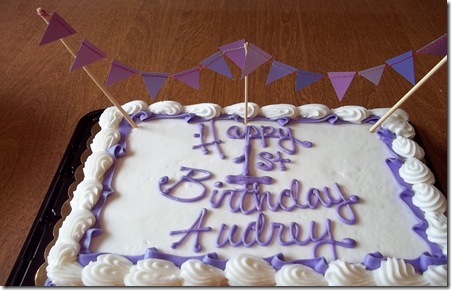 I made a banner to go across the cake with the scraps left over from the garland…it was soooo cute!! 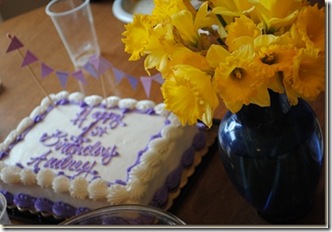 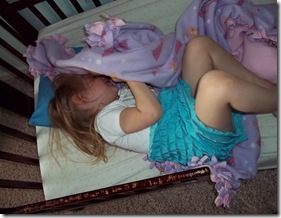 Laney was a bit put out by all the presents for her sister and the lack of complete attention on her!  She melted down a few times, running down the hallway and throwing herself on her bed!  She is three after all, you wouldn’t expect much different! 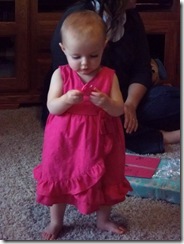 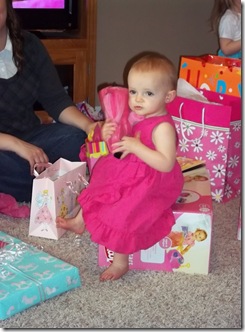 Audrey had a great time helping her mommy open the presents…she sat on the walker box pretty continuously after it was opened.   She then decided to poop unceremoniously in the middle of the party crowd!   Silly baby! 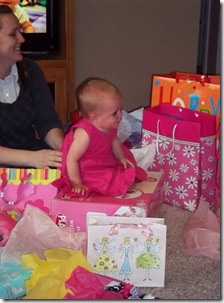 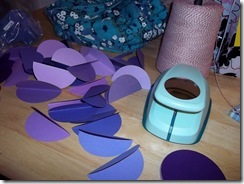 Now for the tutorial!
You will need:   Heavy thread, string or yarn (I used bakers twine)
Cardstock
I used a large circle cutter, you could just cut them out freehand, but I went the lazy route!
I also used my Xyron to put the adhesive on the back of the circles. 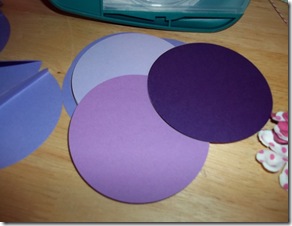 Cut as many circles as you want to make your garland long and run them through the Xyron machine.  I folded some circles in half first, then opened before I ran them through the Xyron.  Some I didn’t fold first and I folded them after.  I must say it was easier to get them folded evenly if they were folded first before they had the adhesive applied. 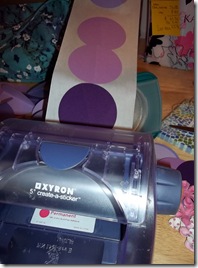 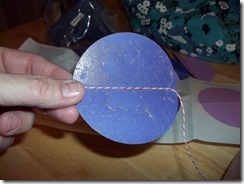 Then lay the twine in the middle along the fold…and then just fold the circle in half with the string inside. 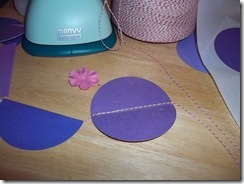 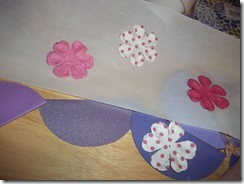 I added some flowers I found at Michaels in the $1 bin.  I think it was a package of 12 and I just ran them through the Xyron also (double lazy!) so that they stuck well to the half circles. 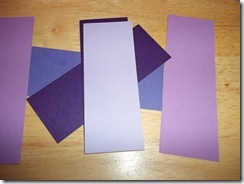 I had these strips of paper left over…I have always wanted to make a cake banner.  I cut the strips 1 x 1.5 inches, then I trimmed them to a triangle shape, just free handed them! 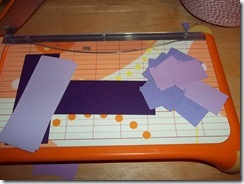 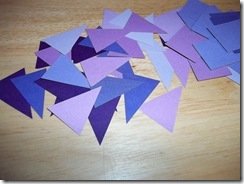 Then I took them upstairs to my sewing room (AKA the disaster zone—but more about that later!) and sewed them together with a variegated pink heavy thread. 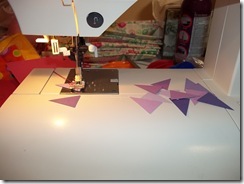 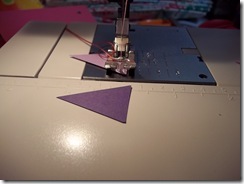 Now I had myself a great flag banner.   I attached each end to a bamboo skewer and cut off the ends of the skewers so they were close to the cake but not right on top of it.  And I added a shorter skewer in the middle to keep the middle of the banner off the cake! 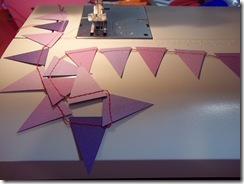 So that’s all there is to it!  They looked great and added a sweet touch to the party!
I am linking to these great parties!

Posted by EllensCreativePassage at 9:53 PM

The banner and the garlands did indeed look very sweet! Thanks for helping out your flair-impaired niece! :)

Love the banner and the cake. Lovely pics!

I am having a giveaway on my blog. $20 store credit from My Carrie Creations to get a backpack with your kids fav character ( fancy Nancy, princessses, ballerina and more). Check it out.
http://houseonashwelllane.blogspot.com/2011/03/20-store-credit-from-my-carrie.html

Ellen. This is why you are my hero.

So cute! Thanks for linking up!!

very nice Ellen, and so wonderful to share your craftiness with family! thanks so much for sharing on Craft Schooling sunday!

i love all of these decorations! so cute and girly :)

PS: I'm doing a giveaway on my blog for $20 to my etsy shop, so if you like pretty jewelry you should come enter!! http://mygirlishwhims.blogspot.com/2011/04/my-spring-fling-giveaway.html

What a great idea! And re-usable too for years to come. I love the flowers on them too, thinking my little girl will get a banner like this for her party this year. Thanks for sharing the idea!

Thanks for linking up! I always forget about garlands until the last minute!

Great idea to run the circles through your Xyron!

What a cute banner, I love the stitching!

They are so precious and I loved the banner but especially the little one on the cake. Great idea.

Aww, happy birthday to your little girl! I'll be planning two parties soon. I love the mini banner on the cake. :)

so cute, what a great birthday party, the kids are beautiful. thanks for sharing this at my party!

Love the buntings and banners. Great color combos. :-) Thanks for linking up to Marvelously Messy....be sure to stop in next Monday for another party!!

I love the garland. So cute!!

Thank you so much for sharing this at last week's For the Kids Friday link party! This week's party is up and running. If you haven't already stopped by, I'd love to have you sharing again this week!

I love that garland but the banner is my favorite! I'll be making my niece's cake next month and I'm pretty sure I will make one of those to go with it! Adorable! Thanks so much for joining me at Anything Related!