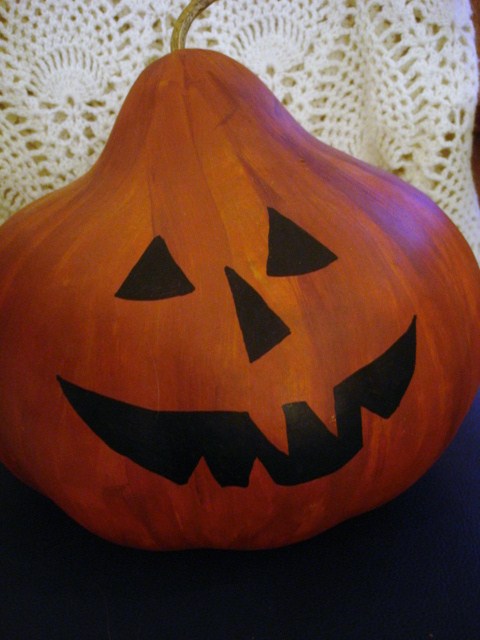 Two years ago my brother (who happens to be an auctioneer) brought me 4 or 5 large (think refrigerator) boxes full of many kinds of gourds...he knows me well enough to know that I am a crafty person and thinking that more is better, he bought them for me for a bit of nothing!  Seriously the boxes were so big it was difficult for me to get around in my garage. 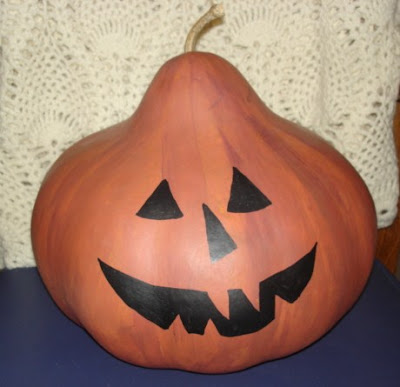 I didn't know there were so many kinds of gourds.  These gourds were seasoned, they had laid out in the field and looked rough, but if you scrubbed them until your fingers were falling off there was a fresh lovely gourd underneath.
I went to the library and checked out a gazillion books on what the heck to do with gourds.
(As a side note here, isn't the afghan my mom made for me in 1977 beautiful? It's a knit pineapple pattern and I love it and keep it on the back of this mission rocker.) 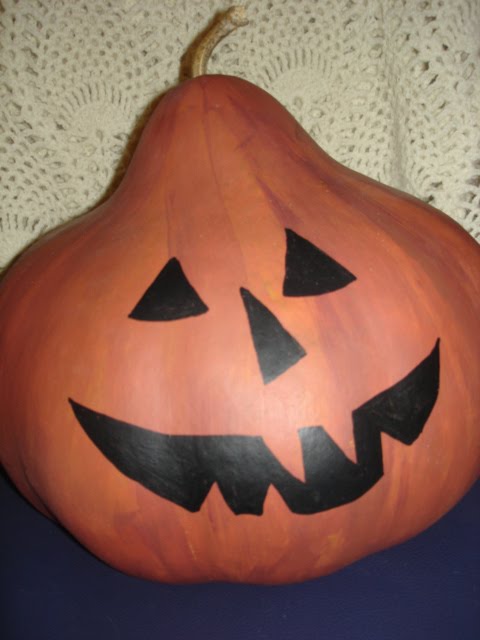 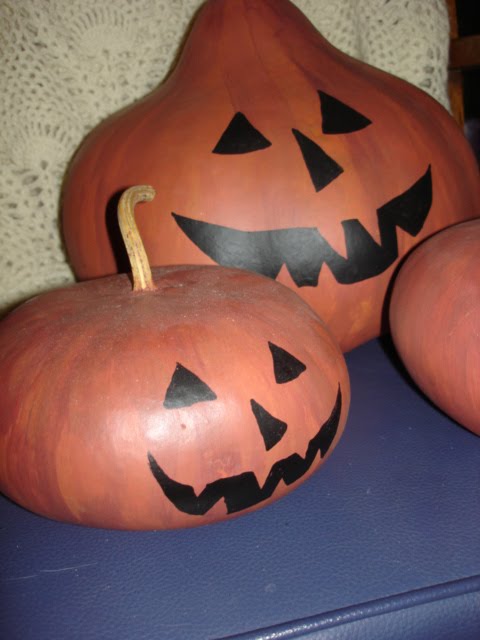 So I found a magazine that had a painted gourd pumpkin on the cover of it...not sure but I think Martha Stewart had something to do with that magazine.  But that was two years ago and my memory is no longer present, so I can't really remember....maybe it just reminds me of something that Martha would do.
Martha probably would have dusted these guys off before taking photos of them to post on the world wide web...but then again, I am not Martha! 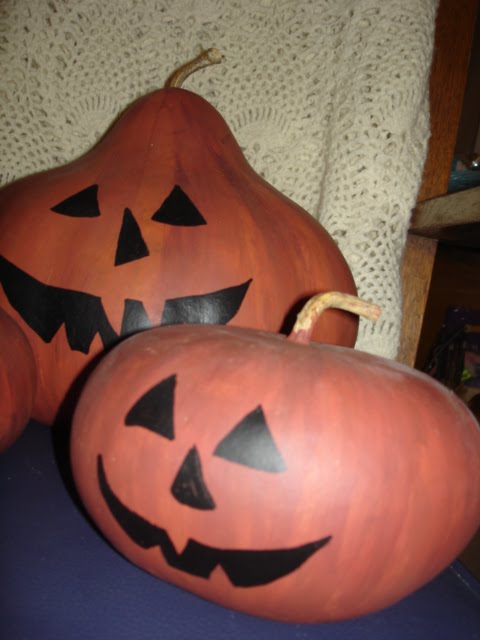 The seeds are still inside them, I didn't cut into the gourd. I looked for gourds that were somewhat shaped like a pumpkin.
I scrubbed the dickens out of them to get that outer skin off and then I painted them in streaky orange paint mixed with some browns...so create those ribs that pumpkins have. 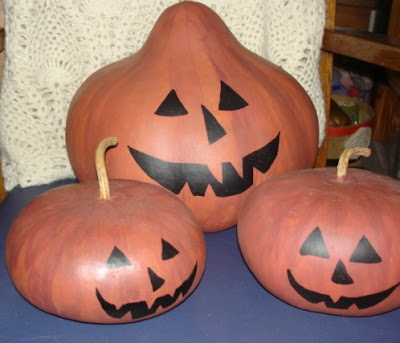 I just used acrylic paint and no primer (I am sure Martha would have primed them!).
I wanted a vintage style face on them so I googled "vintage pumpkin face" and came up with these faces. 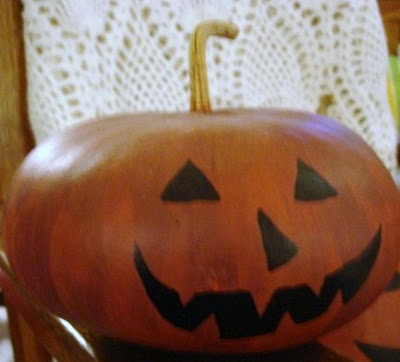 They turned out really nice for a fly by the seat of your pants project. 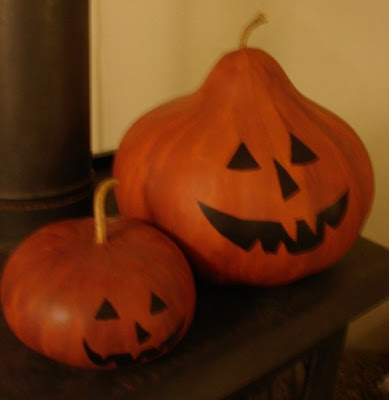 I like how they look on top of my wood burning stove.... 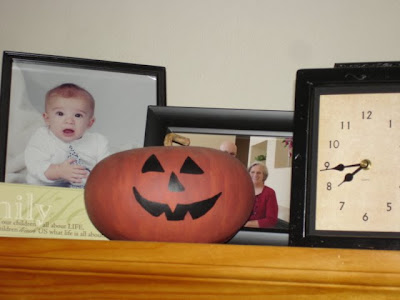 and here on my picture shelf!
Now about those gourds....I sold a bunch of them...gave some away...cracked open a few of them accidentally and saved the seeds and then lost the seeds permanently.  I still had a few boxes left at this point.  I finally gave the rest of them away.  People were afraid to come to my house because I made them take gourds home with them. 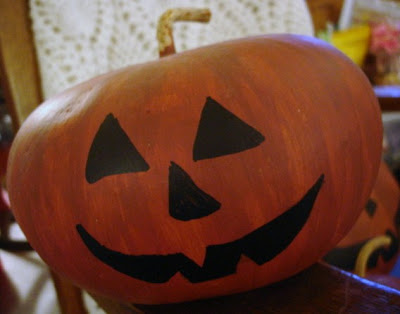 This spring I was cleaning out the garage and was trying to push a box back on a shelf, but it wouldnt' go...you guessed it, there was a gourd back on the shelf...I tossed it out in the back 40...I never want to meet another gourd again!  Except these of course!

Posted by EllensCreativePassage at 10:52 PM

What a fab idea! Thanks so much for sharing, this one is cheaper and will last longer!

I really like this since you can reuse them.

The gourds are beautiful!! And reusable is the best!

Thanks for linking up to Show and Tell Saturday!

Thank you for joining us at A Crafty Soiree! I hope you'll come back next week and link up again! Those are so cute, I was wondering if they were dried out, but I saw that you said they still have the seeds inside. So they just dried out naturally and didn't spoil?

Fantastic!! Did you keep pictures of all the birdhouses you made with the other ones?? They sound very interesting!

Thanks for linking to A Round Tuit!

Jill @ Creating my way to Success
What a fabulous idea! I love how you've themed the bags to match the contents! Brilliant!!

Thanks so much for linking to A Round Tuit!
Have a lovely week!

Bella @ Bella before and after said...

Hi Ellen, these are Beautiful, I love how they look. Even smoother than a real pumpkin, just how much scrubbing did you do? I am hosting a new party **6 weeks 2 Spook** and would love to have you link up. My readers would love this, Thanks Bella :)

You're so resourceful! Love that these are actual gourds, not fake ones. They look awesome. Thanks for linking up!

Thank is funny! I love your pumpkin gourds! They are so super cute!!!

I just wanted to stop by and let you know that I linked to this post today from the new Home & Garden channel at Craft Gossip. :) My hope is to share many of the fabulous projects I see everyday with the vast CG audience. I hope you will not only stop by and subscribe to CG, but will tell your friends about the new category! Hope you see some traffic from it!

Your feature will appear in the main Craft Gossip RSS feed, on the main home page and can be found directly here
http://homeandgarden.craftgossip.com/6-cool-jack-olantern-projects/

If you would like a "featured by" button, you can grab one here!
http://homeandgarden.craftgossip.com/grab-a-craft-gossip-button/

They look terrific! Thanks so much for stopping by and joining us at Anything Related!
{Rebekah}