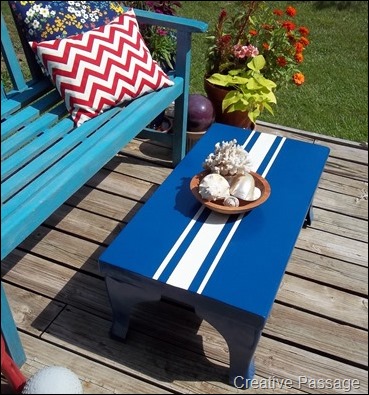 I have been working on this project for weeks! 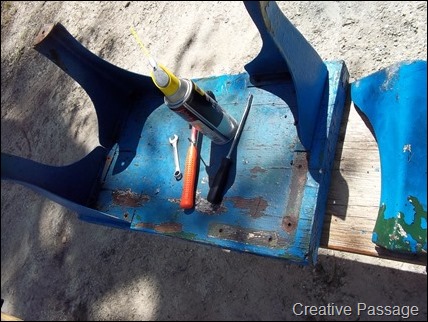 This is the only before picture I can find of this bench/footstool.  It has sat on my deck for probably 10 years…every few years I paint it again and buff it up, but this year the two corners of the wood slab top were rotted too badly to ignore. 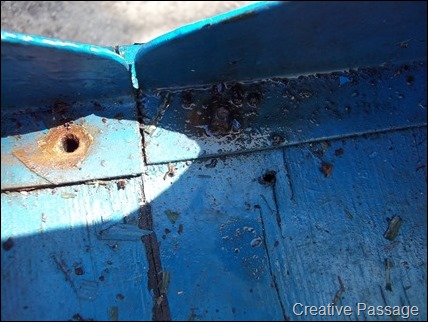 One day I decided to take the legs off since they were still in great shape and replace the top.  I tried to remove the screws and couldn’t (weakling), so I asked a friend to try.  He tried it and couldn’t either, so he told me it couldn’t be done without breaking the legs. 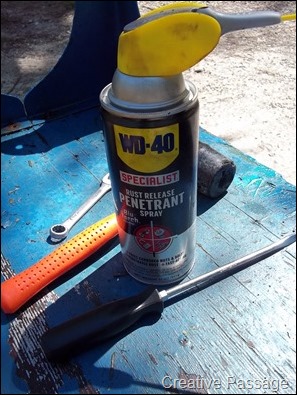 OK, now one thing about me…when someone tells me something cannot be done, I can do it!  I have done all sorts of things because I was told they couldn’t be done.  So I went to Lowes and got this WD-40 Rust Release Penetrant spray after talking to a salesman about my problem. 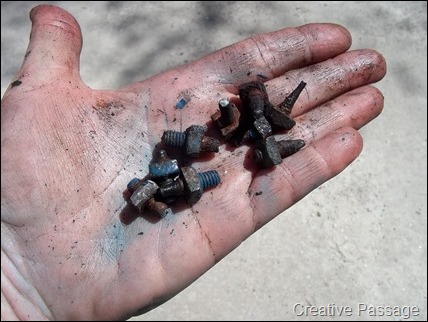 Most of the screws broke off, all were rusted badly, but after that WD-40 was sprayed on I could loosen the nuts and get the legs off that bench! 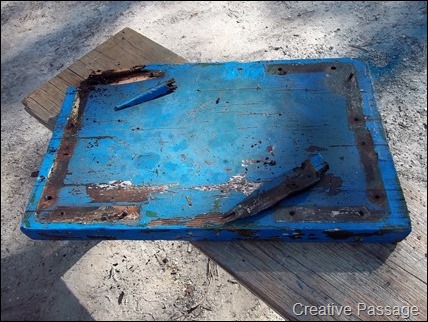 You can see how badly the wood is rotted here. 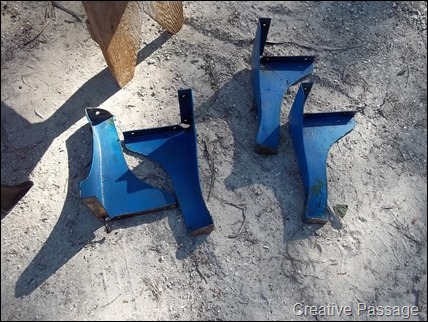 I started stripping the two thousand layers of paint off them when my friend offered to sandblast them (the same friend that told me that the legs couldn’t be taken off because the screws were just too rusted!).  They were so smooth and pretty when he brought them back to me.  I painted them with two coats of Valspar indoor/outdoor primer. 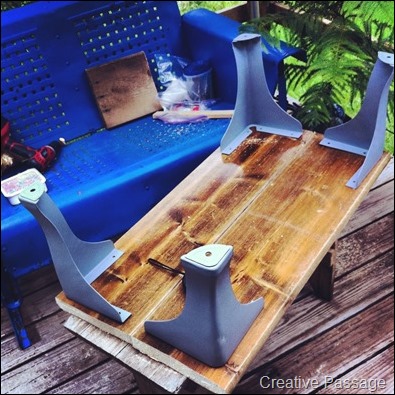 Next I started looking for a top…boards at Lowes and Menards were either plywood,  too costly ($75!!) or not wide enough.  I needed a board that was at least 16 inches wide because of the space that the legs took.  I didn’t want to use two pieces of board until…my brother offered me a really nice 1 1/2 inch thick board (10 x 6) for free!!  This board was even rounded down one side but square on the other.  Perfect!! 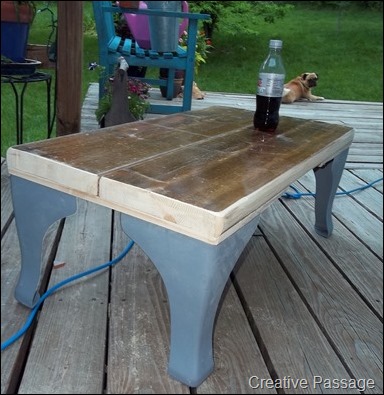 So to make the top of the bench sturdy, I glued and screwed a series of 1/2 inch boards across the underside of the top. 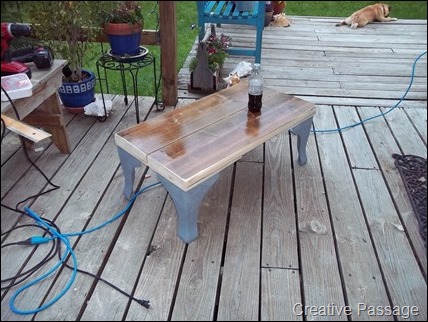 Then I used copious quantities of some wood putty to fill in the imperfections in the wood; I cut the boards and they may or may not have been imperfectly cut!  At this point I debated about leaving the natural wood, but decided that I had used too much wood putty, I was committed to painting! 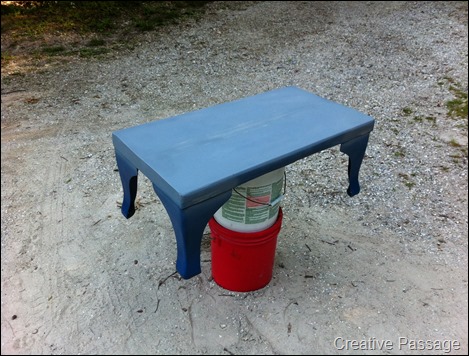 I still wanted the bench a rich blue color, so I used Valspar Deep Sea Diving spray paint with primer.  It was exactly the right shade! 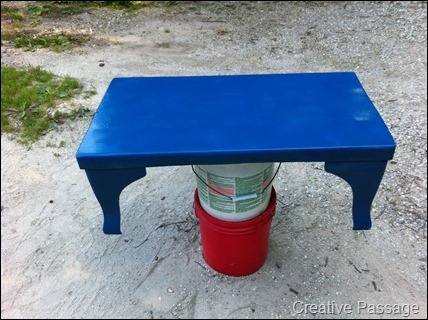 Don’t judge and don’t be envious of my two buckets of joint compound work space!  Sometimes you just gotta do what you gotta do! 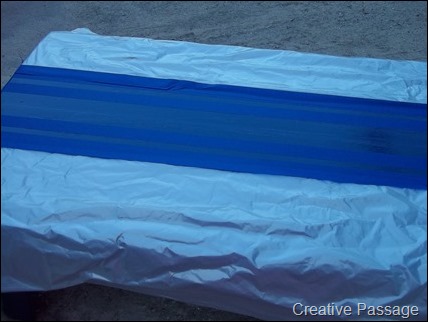 I measured and taped off a wide stripe and two narrow stripes and painted them off white. 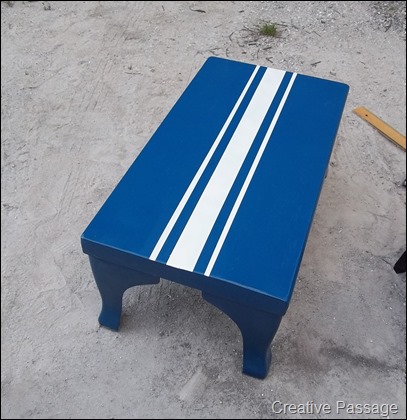 I was so happy it was done I just sat down and looked at it for probably 20 minutes!  After it dried inside for a few days, I finally put it where it belonged! 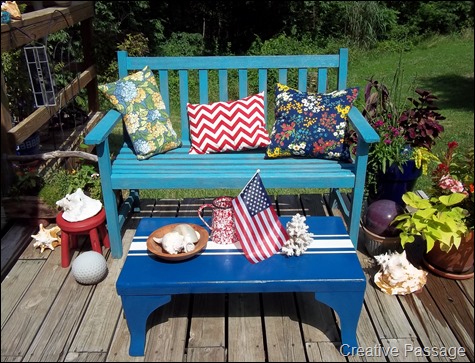 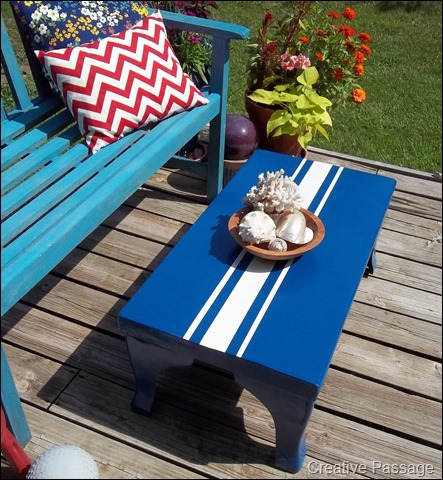 The stripes turned out better than I had imagined they would! 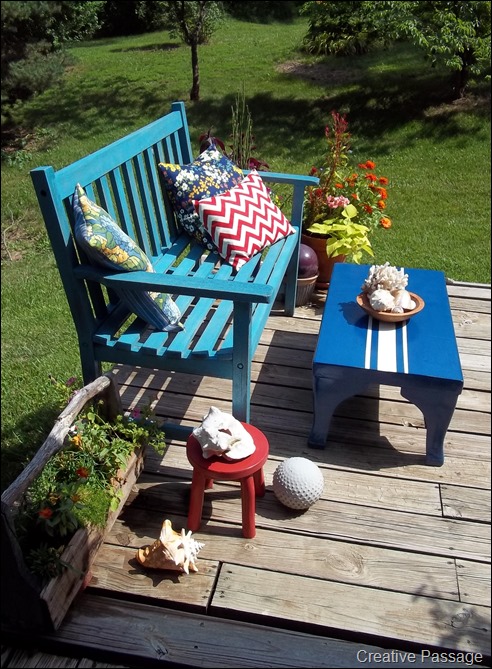 The chevron pillow I made from fabric leftover from my mom’s pillows I made a few weeks ago. 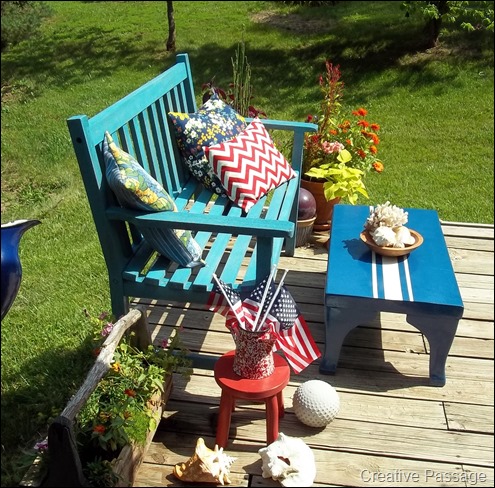 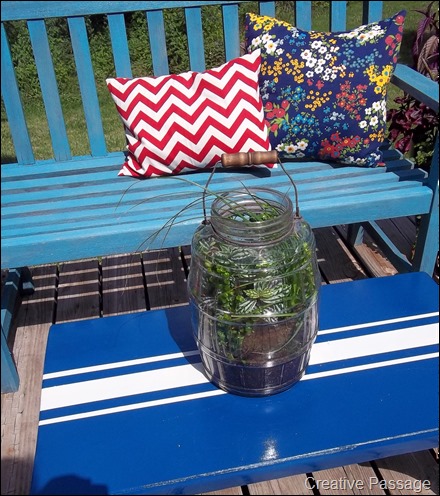 The flowered pillow on the bench my sister Sarah made for me…it came in my last sister package. We exchange handmade gifts every other month. 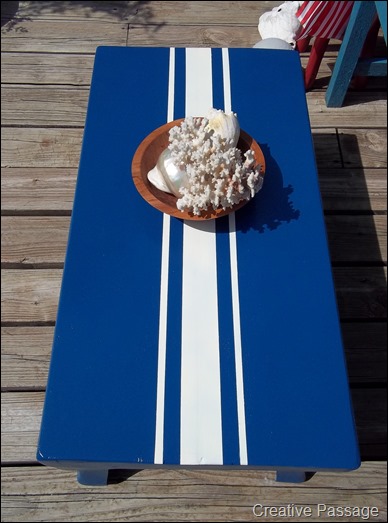 I am linking to some of these great parties!

Posted by EllensCreativePassage at 11:36 PM

That turned out amazing I love the pop of white great job!

That's really nice. Love the colour and I especially like your homemade gift exchange idea. How lovely!

GREAT makeover Ellen! It looks like brand new!
Thanks for linking to a Round Tuit!
Hope you have a fabulous week!
Jill @ Creating my way to Success
http://www.jembellish.blogspot.com/

Your bench is beautiful. Great tip on the WD-40. I have 1 handle left that I am trying to remove from an old wooden box and cannot for the life of me budge the screws. I really don't want to ruin the wood by sawing it. I am going to pick some of this up. Thanks for sharing.
Sarah
http://www.creativeramblingsblog.com

great done and i love the color combo.

It's so beautiful! I love the colors. Very summery, and perfectly set for the 4th!

It looks amazing! I absolutely love the fun striping against the bright blue. I just did some similar striping on my son's nightstand (though I have yet to post about it). Can't get over what a change to your table!! Great job!

Beautiful!! A lot of work, it looks like, but worth it! You did such a good job. :)
Gina
http://ginascraftcorner.blogspot.com

I love the pattern, this looks terrific. Thank you for sharing. I'm hopping over from the Scoop hop today xo

I love it, what a great makeover and the color is wonderful. Thanks tons for joining Inspire Me. Hugs, Marty

Life With The Crust Cut Off said...

This looks awesome!!! We would love it if you would link up at our linky party:
http://www.lifewiththecrustcutoff.com/two-girls-and-a-party-link-up-22/
Live every Wednesday to Sunday.
Hosted by:
http://www.lifewiththecrustcutoff.com/ Parrish @ Life with the Crust Cut Off
http://thissillygirlslife.com/ Dana @ This Silly Girl's Life
We hope to see you there!

So very cute!! I love that blue color and the stripe down the table just makes it!
Jenna @ Rain on a Tin Roof

how cute! love the stripes

Popped over from Simple & Sweet. Your bench looks amazing, and all that hard work you put into it paid off! I'm the same when someone tells me "can't be done" ... to me that just sounds like giving up. Anything can be done when you put your mind too it. I'm glad you were able to save those little metal legs as they add a special vintage feel to the bench. I have an old wooden bench of my grandfather's that I want to repaint and haven't started because I can't decide on a colour. Happy Weekend! Wendy

This is an interesting piece of furniture to begin with..love the metal legs. And I love how you redid it...the stripes are great.

This redo looks adorable and inviting! Great job! I love all the colors!

What a Fun Project, I love the 2 blues together! I would love you to come link up at my Paint Party going on now
http://startathome.blogspot.com/2013/06/paint-party_26.html
Hope to see you soon,

woah, what a huge improvement and love the kobalt blue!!!! :)
Thanks so much for linking up for Habitat! Good luck and hope to see you again next week!

I see that you are from my home state.

This is so adorable! I love it! It looks so cute with your outdoor bench and pillows! Lovely!
Morgaine from Madcap Frenzy
P.S. I would also like to invite you to join my June Totally Tuesday Link Party:
http://www.madcapfrenzy.blogspot.com/2013/06/june-totally-tuesday-link-party.html
Hugs!

Too cute! This would be great at my beach house! Love love love the stripes!
Jenna

This looks great, I love the stripes! Isn't it so fulfilling to see a project that you've spent weeks (or even months) on turn out so well!

LOVE the makeover on the bench and especially the color!

Thanks for sharing on the BeBetsy BRAG ABOUT IT. Have a wonderful weekend!

I LOVE the redo, and good for you talking to the salesman and getting those rusty screws out! You table looks fabulous! Thanks for linking up to the DIY Sunday Showcase, I am pinning this now! Jen

Haha Jennifer beat me to pinning this! Thanks for sharing on DIY Showcase!! Love it!!!!!