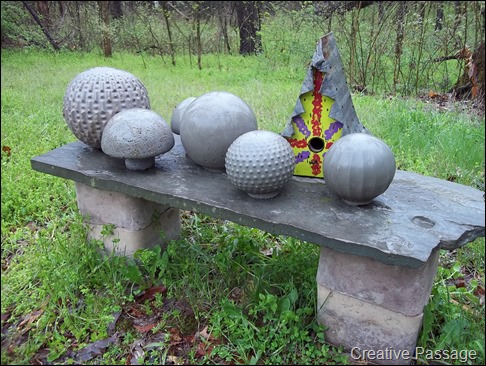 I made one of these cement “gazing” balls (you can’t really gaze into a cement ball, but you can gaze at it!) last summer and wanted a few more to put with it… 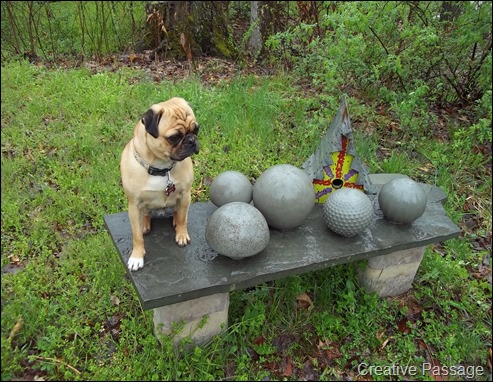 I had been collecting glass light globes from auctions (my brother has an auction company) and the Habitat for Humanity Restore in Columbia.  After last summer’s project, I decided to find some that were made of a lighter weight glass.  The most I paid for one was $2. 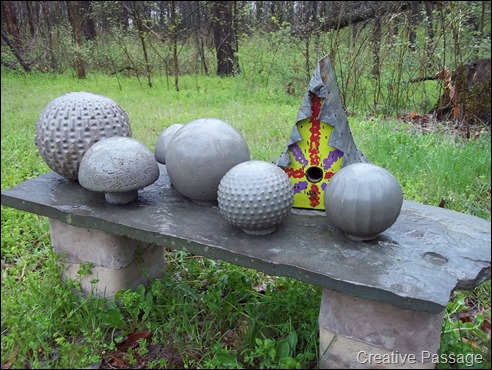 One warmer January day I decided to mix up the concrete and fill up the globes. 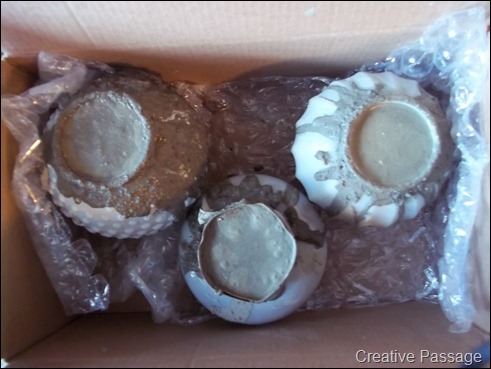 I put the globes on some bubble wrap in a box and an old wash basin.  After mixing and pouring the concrete I just let them sit for several days.  The first time I made a concrete garden ball I ended up with a zillion (or maybe more) little cuts on my hands.  When it came time to break the glass off, I taped the box lid up so it was a tall extension on the box. 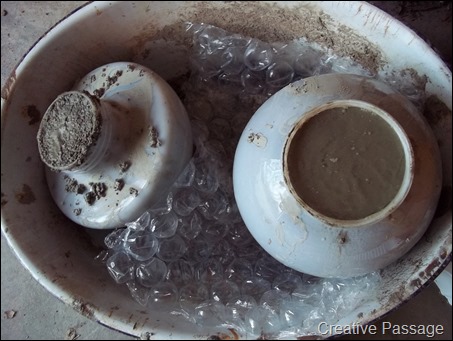 Then I put the hammer through a hole in a tarp, put a glove on my hand and started hammering away!  I broke most of the glass without even looking at the balls.  And the mess stayed inside the box so it wasn’t hard to clean up after I was done.  I had NO cuts on my hands. Yay!! 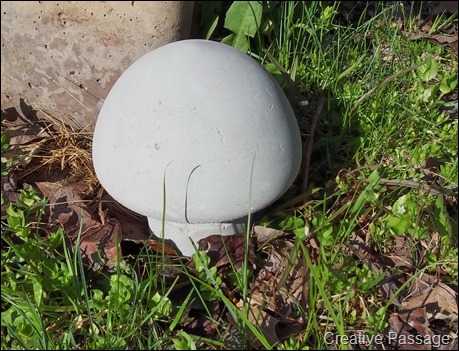 Two of the globes had a longer “stems” so they are shaped like mushrooms.  I love the way they turned out.  The polka dot one is really cute and the one with the vertical depressions on it is really cool too! 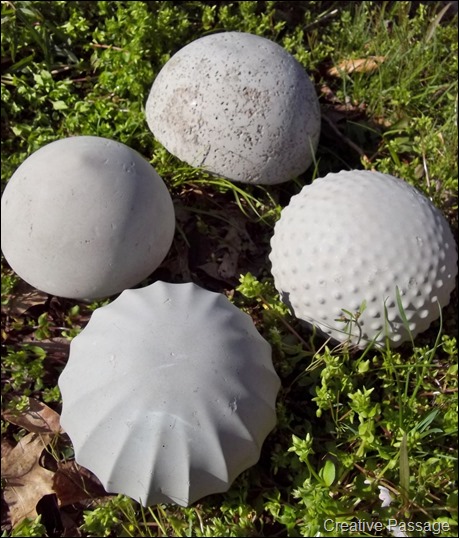 Eventually my plan is to have some of these sitting out with moss growing on them.  If I remember right though, the concrete needs to cure for a bit so  I left them outside today in the rain…seems like I read something about the pH of the cement or something like that. 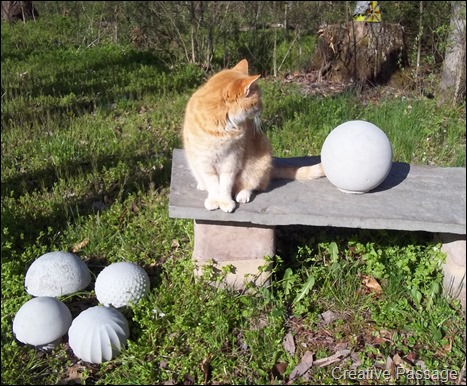 One of the balls is totally smooth and round… 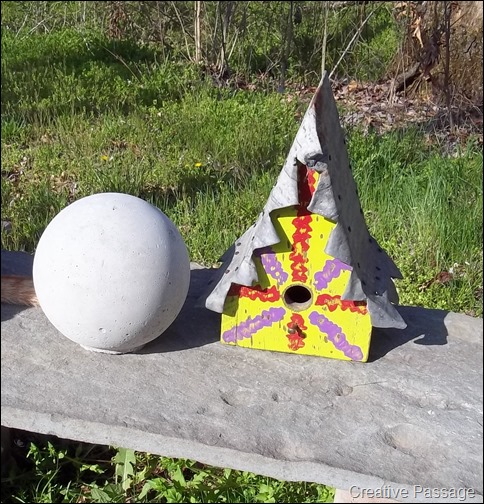 I probably got too excited about it feeling like spring, I put up the hammock and even laid in it for a bit. 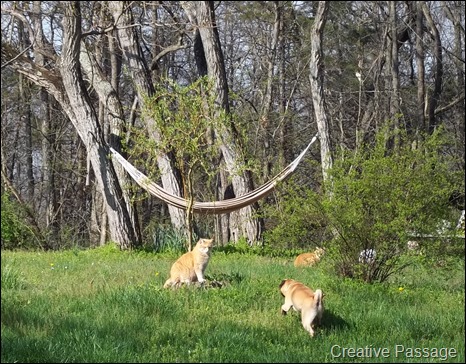 Milo and the cats helped me with the photo shoot of course! 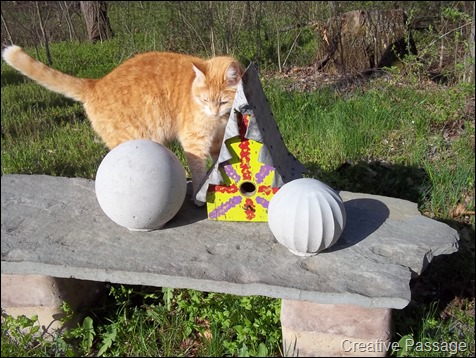 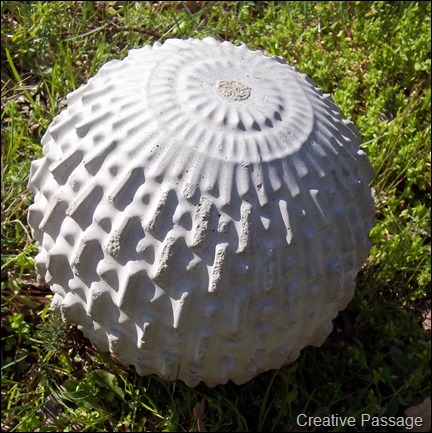 This is the one I made last year and the one below is one of the new ones…love the hobnail look! 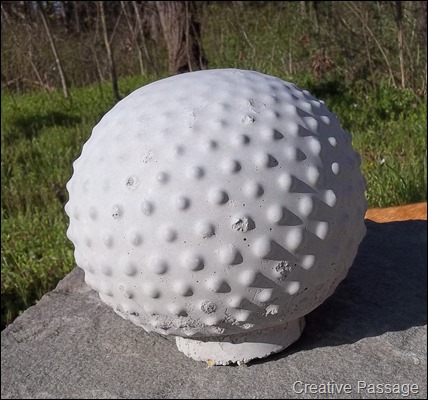 I might be linking to some of these great parties!

Posted by EllensCreativePassage at 7:29 AM

Oh my gosh Ellen! I am making some of these this weekend!! So fabulous! I'll be seeing these featured everywhere...such an awesome project girl!

Love the idea...You are just way to smart! Will have to give these a try...Thanks for the inspiration. :)

Great idea and they look so pretty in the garden. New Follower.

These are awesome! I love them all!

I love this! I don't think I'd be able to have them in my yard as I'd be worried about them being thrown through a window but they're fantastic!!

Those are amazeballs! Ha! Did you use quick cement or regular?

These are so unique! Thanks for sharing.

OMG. These are WONderful! Thanks for sharing your instructions. Maybe someday . . . Linda @ www.paperseedlings.com

I love these and now I can't wait to make my own. Anyone can have a gazing ball, but not everyone will have an AMAZING ball! Hahaha! Thanks for the tutorial. Saw you on 5days5ways.

What a GREAT idea!! I also love the long steams to look like mushrooms!

Stopping by from Pin Me Linky. Alexis from Running Away? I'll Help You Pack!

Those are fabulous. I might have to try this and stain/paint them.

Fun and fabulous! Thanks for sharing!

Well aren't those fun looking! I love the "polka dot" one :)

I know where I want to go the next time I go to town--the Habitat Re-store! I'll be looking for light globes so I can try this. Wonderful idea!!♥♫

That is such a great idea! I've been wanting to make something out of concrete for a about a year now! Thanks for the inspiration;)

Your project turned out great! I've been wanting to try this idea forever, maybe now I will! I'm in Webb City, MO, BTW :)

These are really cool! Great idea!

What a great idea for the yard and garden! Thanks for sharing.

What a great idea!!! Will Pin it to use in the next few weeks!

I pinned this last year, but never got around to doing it. I am glad you solve the flying glass part of the project. I would like a whole bunch of these spread out in the garden. The polka dot one is my favorite. Pinning again!

I see these all the time on sale at Goodwill for pennies! I can't wait to make some with my son this summer!

I think I might color the cement too to give it a little something-something. :)

I'd love it if you would share this project sometime over are Parlo and LOGI for F-it Friday-
http://www.parloandlogi.com/category/f-it-friday/

These are fantastic - thanks so much for sharing at Monday Funday! Take care, Laura

Wow, I love these. I am always looking for ideas to put things in my garden that will last. I have several of these plain shades so I know what I will be doing. coloring the cement might also be fun.
Have a wonderful week,
Bev
@ Eclectic Red Barn

I love your garden balls and can't wait to make some! Thanks for the great idea!

How amazing! So cool. Must show husbands! :) Thanks for sharing this on our Brag About It link party. Hope to see you Thursday for our big big co-host Favorite Things.

Really unusual and special! All the best ~ Sharon and Denise

So
Glad you shared these! They are awesome!
I found your post at creative princess, now I'm your newest follower!

oh my gosh, HOW neat! and you've got some great helpers.

Hi, Ellen, this is right up my alley! I have been looking for glass globes myself. I was thinking of doing mosaics on them or just painting them but I LOVE this. This is what I'll do doing when I find some globes. I found one last year and I put some Christmas lights in it and it lit the walkway all summer and Fall. I'll be featuring you tonight at the new Linky Party What to do Weekends and I am PINNING this project under gardens. Best wishes, Linda

Brilliant way to use those useless orphaned light globes - I have a zillion of them! thanks for the great tips!

What a Great idea! Love them!

These are so cool, and becoming trendy. The only thing I've ever made is concrete rhubarb leaf stepping stones. My recipe makes a coarser looking project, did you use a specific kind of cement? Also, I'm wondering if they would overwinter in southern Ontario where I live.

thank you so very much for sharing over here at this weeks first garden party of 2013! hope to see you again this week! hugs...tracie

LOVE your awesome garden spheres, they look like something from a high-end garden boutique ~ I can't wait to try it!

These are great ! Found you from Simple Details blog!
xo Nancy
Powellbrowerhome.com

Thanks for the tip on smashing the glass inside a box and wearing gloves. I have been collecting globes for this project all winter. Time to buy a bag of cement mix and give it a whirl.

These are SO amazing!

Lauren @ My Wonderfully Made said...

Wow -- I would have never thought you could do such a thing! Fantastic!

These are fantastic! It would be awesome to also stain the cement!!! Definitely am going to start looking for the glass globes