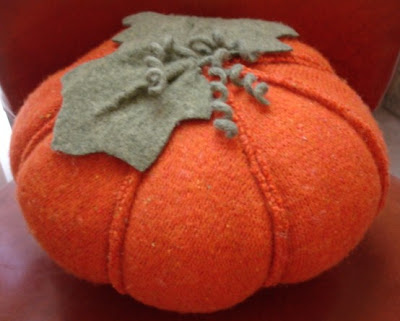 I found a beautiful orange men's sweater at Goodwill...for $3, thinking I would eventually make some felted wool something or other with it.   I was cruising blog land and found a pumpkin tutorial here.
Well, I bookmarked the site and thought I would make some fabric pumpkins at some point.
One day I was going through my felted wool/sweater stash (yes, I have such a stash) and found the orange sweater.  It didn't felt real snugly, but it was such a great fall color...just perfect for the pumpkin project.  I cut the pieces (there is a downloadable pattern on the site) out and tucked them away in a plastic ziploc.
Well, since I am doing "lap crafts" now because I can't bear weight on my left leg now, I dug out the ziploc and without following the directions, sewing all eight panels together. I had forgotten that I had cut two pumpkins out!!!
So anyway, here is what I did and it turned out fine, just a lot bigger than the original pattern. 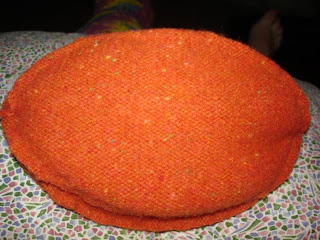 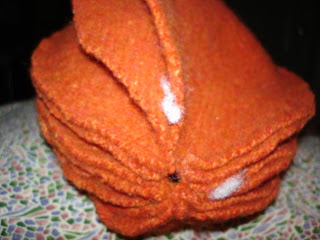 I sewed them all together with the seams on the outside for more rustic effect (should pumpkins be rustic?). 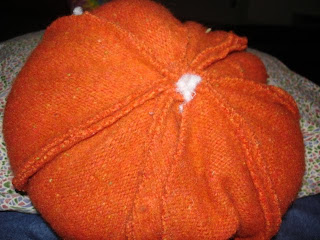 I left one side open for stuffing...and then I began to stuff it like it was a Thanksgiving stuffing.  I used Morning Glory brand Cluster Stuff which is the best stuff I have ever used!  It is not lumpy at all, sort of reminds me of foam stuffing without all the mess. 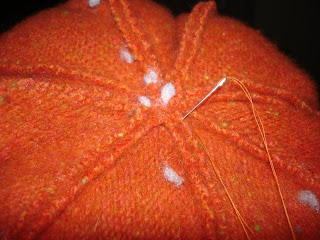 After stuffing almost a full bag into this poor little guy, I sewed the hole shut. 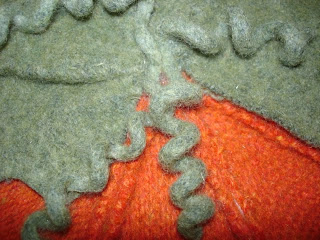 Then I took a felted green sweater and cut leaves out of it (I did a google search to get an idea of what pumpkin leaves are supposed to look like).  This particular sweater had a drawstring hood so I used the drawstring to create the curlicues on top.  I hot glue the leaves right onto the top, after I created a vein down the middle of each leaf.  I also made one leaf smaller than the other one, figuring that leaves in nature are not perfectly the same. 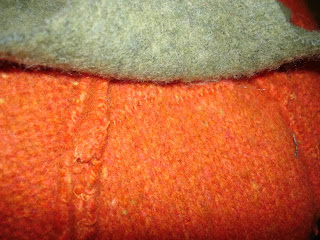 I even hid a sweater seam I couldn't avoid underneath a leaf on the top. 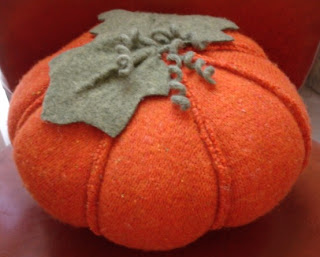 And there it is~~an August pumpkin!!
There was a question about how I got the wool ties to make curlicues...I wet them with a heavy spray starch and then wrapped them around a size 8 knitting needle with clothespins on each end to hold them onto the knitting needle.  I let them dry overnight and then they were ready! Posted by EllensCreativePassage at 1:05 PM

Cute! It's a nice look forward to fall.

Ohhh I love it! Fall is my favorite season and I have started to see the stores all decked out! I am so excited and I can't wait to make these!

I am your new follower!
Lisa
http://homemadehodgepodge.blogspot.com

that is so flippin' cute, i can't stand it! i want it! great job!

It is beautiful! Thanks for the idea of reusing clothing for a sewing project.

So very cute and clever. You pulled everything together into a good looking project. I love it!

this is great! I love pumpkins! Can't wait to try this, thanks!

This is sooooo cute!!!! I love the orange color too...great find!

Thanks for linking up!

I'm going to be a busy woman trying out all of your tutorials!
I have been trying to get a comment to you that I passed on an award to you but my computer is having issues! But I'm glad it was a nice surprise!
Ashley

okay i might sound like a dope, but how did you get the string to stay in a curlicue?

This is beautiful! I'm starting a little weekly theme "Sharing A Little Bloggy Love" and would love to add this tomorrow night! If you don't want me to just shoot me an e-mail. Thanks for sharing such a pretty project!

That is really cute!

This is really a precious little pumpkin. I love your Goodwill endings and what your share!

It is never too early for pumpkins in my book!! I can't believe you made this out of a sweater! It's so cute! Thanks for sharing!

Great pumpkin! I love that it's made from an old sweater too!

Thanks for linking up to A Round Tuit!

This is soooo cute. It's time to begin preparing for the fall holidays and this pumpkin is a wonderful idea!

oh my gosh- that is awesome! You did a great job:)

Very cute. I don't think I have seen a orange wool sweater. I might have to watch out for one.

Saw you on Lucky Link Tuesday.

Stephanie Lynn @Under the Table and Dreaming said...

Hi Ellen! I just love this idea. The pumpkins are super cute! I just need to add orange sweaters to my list now! I am featuring this today; stop by and grab a featured button if you like. Thanks so much for joining the Sunday Showcase Party. I greatly appreciate it. Hope you have a fabulous week! ~ Stephanie Lynn

This is so darling! And, yes, pumpkins *should* be rustic!

I love pumpkins and any thing orange...very cute! found you at Under the able and dreaming.

Thanks for the tute! I need to make a new one!
Would love for you to check me out! thanks!

Oooo, it's wonderful. I'm looking forward to fall, too.

Very cute and Fall~ish! Thanks for sharing at It's Party Time Thursday at PonyTails&FishScales!

Very cute. The seams on the outside really add to the pumpkin-ness!

Thanks for linking up to the “Cheap Thrills Thursday” party at Black Kats Design. I hope you had fun and will join in again next Thursday!

I love the cute tendrils. I seriously need to learn to felt already!! Thanks for linking to Craftastic Monday:)

CUTE! i AM GLAD i am not the only one showing fall {halloween} crafts in Aug. Really we are helping those to be inspired early ;) Darling pumpkin. Jen

I'm so ready for Fall...and I've got to make some of these sweet finds! Thank you again for coming to my party!! See you soon sweets!
~Terrell @ FFD~

I love this so much, it's just fantastic, Autumn is my favourite season :)

I love the Pumpkins! Thank you for the tutorial. I will have to try it. I saw your link on Thrifty Decor Chick.

Thanks again for sharing,
AmericKim