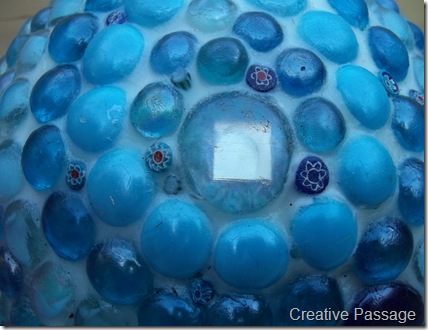 Been wanting to make one of these for a while… 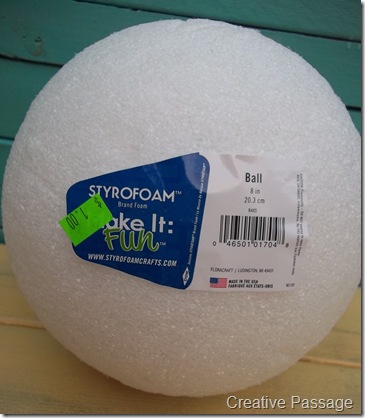 I found this styrofoam ball at the ReStore thrift store in Fort Collins.  Crazy to bring a styrofoam ball back from Colorado, but I did.  This 8 inch ball is from $12.97 to 14.99 at various stores (Wal-Mart, Hobby Lobby, and Michaels) here in town. 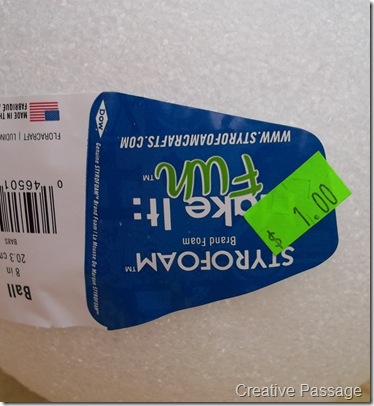 One buckaroo!  I have been wanting to make a gazing ball using flat marbles.  The marbles I had were partly clear so the color of the ball would show through. 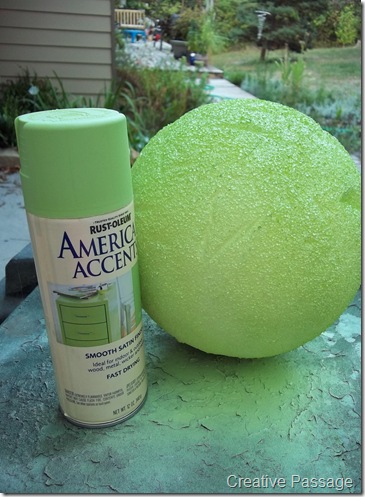 I painted it with some left over spray paint and then sponged on various assorted colors, mostly silver metallic, blues, turquoise and green. 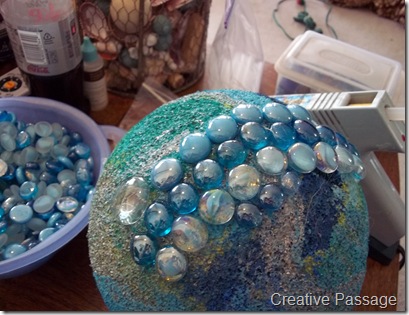 At first I just set it down on the table and started gluing the marbles on.  Pretty soon I was chasing that thing all around the living room, so I decided to put it in a bowl to keep it from rolling off the table. 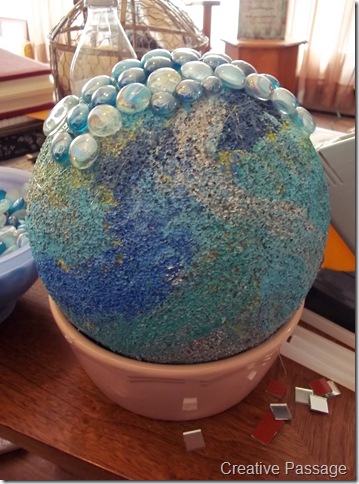 It was soooo much easier after that!  I glued like marbles in rows, throwing in an occasional 1 inch round marble with a tiny square mirror underneath it. I wanted something that the sun could reflect from… 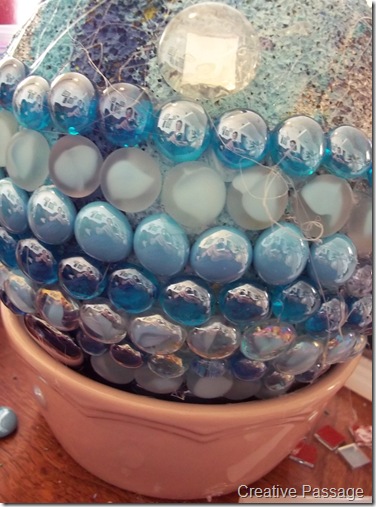 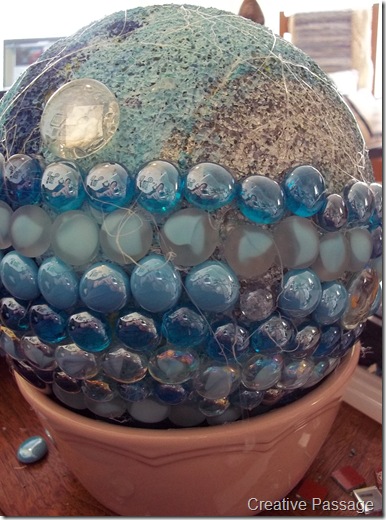 I just used hot glue to stick the marbles on.  Lots of strings! 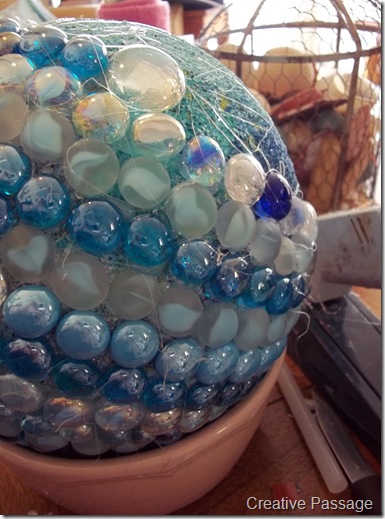 It went pretty fast after I got started. 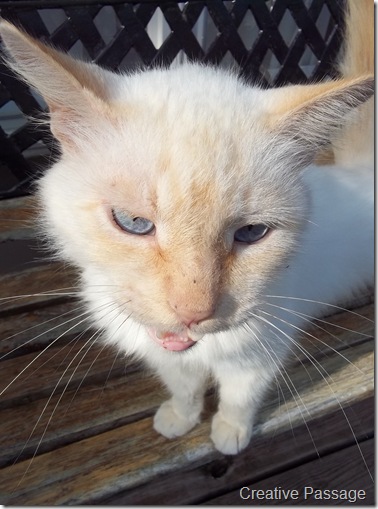 Frosty is not sure, he would have made it a different color! 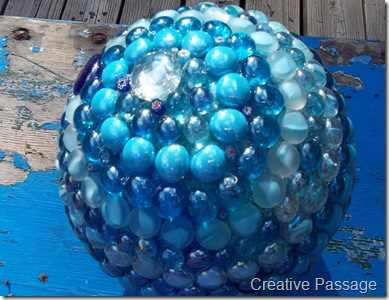 Now just waiting for some clear grout!  I didn’t even know there was such a thing, but Lowe’s had it in stock so I picked some up. 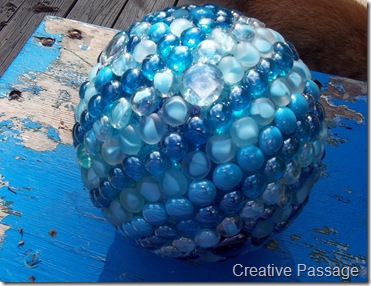 I added some millefiori glass pieces left over from another project, just to fill in the spaces between some of the marbles. 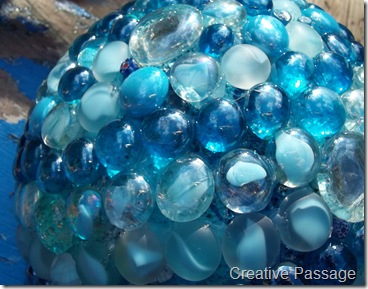 I wanted some type of clear grout/filler.  I searched the web and found a product that Lowes carried.  Well, when I got to Lowes the worker in the tile department highly discouraged me from buying that product! 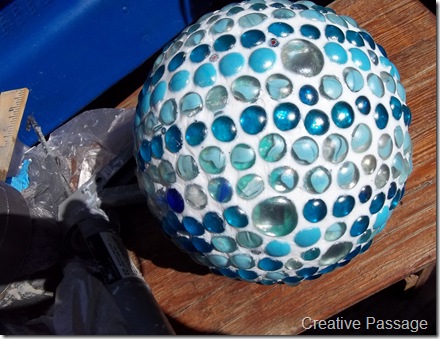 So he talked me into buying a clear adhesive grout product…CLEAR…did you catch that?  Well, apparently I don’t understand what clear is because this sure looks white to me!  So, it is still wet at this point;  I hope it dries clear!  The white isn’t terrible, but I wanted the colors underneath to show through!  I was hopeful that it would dry clear! 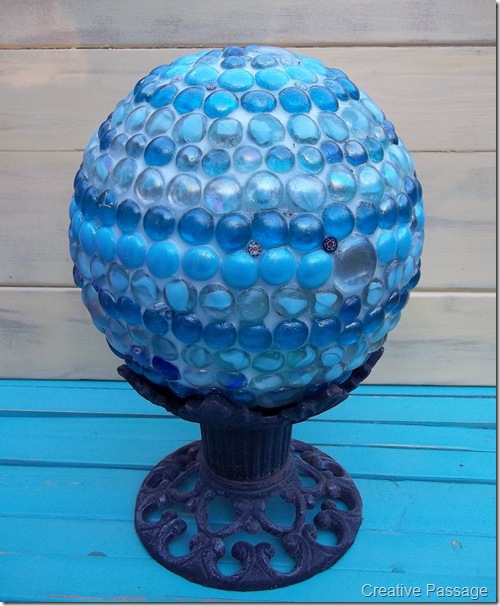 Ok, so you can see that it doesn’t look quite as white, but it is not clear either!  So….not exactly like I had envisioned but it’s still good! 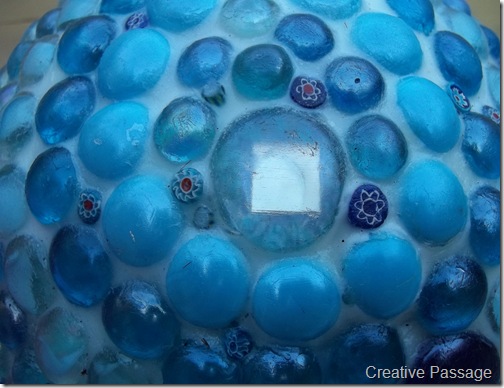 It has a pearly finish…not bad! 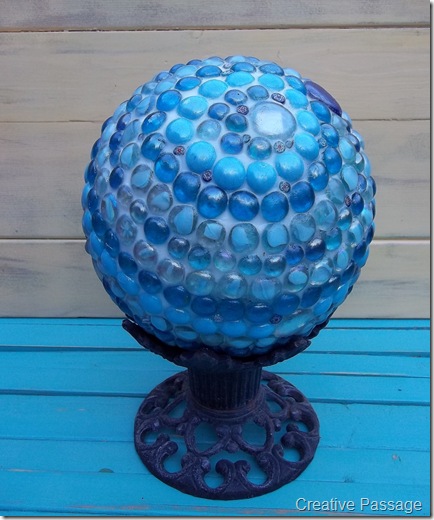 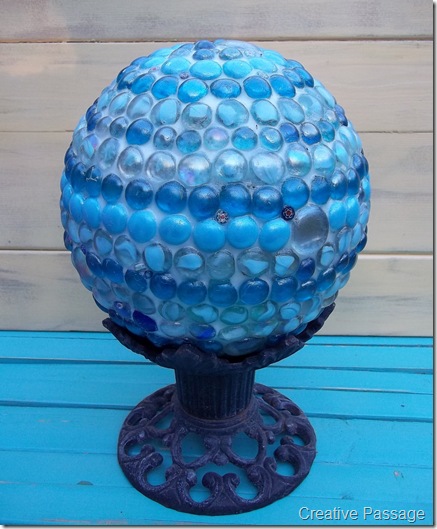 I am linking to these great parties…

Posted by EllensCreativePassage at 10:02 PM

I think it is really beautiful! The special beads probably show up better in the grout you have, than they would have in the clear. I like it, and the stand you have is perfect!
:-}pokey

Ellen, you are just non-stop awesome! I love this project! I have a question...did you glue the little square mirror to the glass bead and then to the ball? or to the ball and then the bead on top of it? This is so very lovely...I have to try it!

How very creative this is - and it seems to match Frosty's eyes! I cannot believe how patient you were to glue each of those marbles on the ball. It turned out great!

I found you thru Suzy's Sitcom...i just love this project! You did a great job! I have a few questions though....
Will this be waterproof to put outside?
I always thought regular spray paint did some awful things to styrofoam. and
I thought you had to use special styrofoam glue...........I'd really like to do a project like this so any help would be appreciated. Hugs! deb

Wow this is beautiful!

Hi Ellen: This gazing ball turned out so pretty--I love all the shades of blues that you used. Your cat is funny--I've got 3 feline helpers who like to oversee my projects, too!

Very pretty, Ellen! Thank you for sharing your project at Potpourri Friday!

Pure Awesome!
How did you manage to spray print and not have the ball melt - I must be using the wrong spray paint

super interesting! It must weigh a tonne with all those marbles!

I love this! I would have never thought to use a styrofoam ball.

I have one of these started with a bowling ball waiting to be grouted.

Yours is very beautiful. I forgot to say that!

Love it. I like the grout colour even if is not clear, it works well.

That looks awesome! What did you use for a stand for it? Whatever it is, it certainly adds to the look! Love it!

What a beautiful decoration!!!
Wouldn't that make a gorgeous hostess gift ( in the hostess's favorite color?
Love love love it!

Thanks for linking up to Totally Pinworthy

I did a gazing ball very similar to this but I used a bowling ball instead. LOL! I like the idea of just creating rings around the ball instead of trying to be artistic (like I was "attempting" to be) by creating swirl patterns. It was much more challenging in certain situations. I LOVE the little beads you added! I agree with the comment above that said they probably show up better with this grout than the clear, so maybe it's a happy oops, even though you feel like you wasted your time painting it in the beginning. Ahhh, the joys of crafting ;)

Jana@Transformations From the Heart said...

Crud, I had a long comment made then I hit enter before I was finished and the entire thing disappeared.
Anyhoo~your gazing ball looks awesome even without the "clear" grout.

Really pretty idea. Thanks for linking to Craftastic Monday at Sew Can Do:)

Beautiful ball Ellen! I haven't heard of clear grout before - but I will have to look out for some! What you used is at least not too bright - but you're right it's not exactly clear either!!
Great ball either way!


Thanks for linking to a Round Tuit!
Hope you have a fabulous week!
Jill @ Creating my way to Success
http://www.jembellish.blogspot.com/

What a fun project. I still like it even though the glue didn't dry as clear as you would have liked.

that looks really great! glad to see what you did with it. and ps MORE PICS OF FROSTY PLEASE!!! that cat cracks me up :)