A new felting book & another attempt at wet felting! 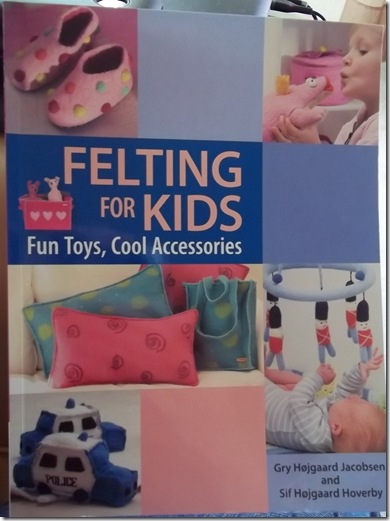 My mom and my sister were here this weekend and my mom bought me this book….she’s nice like that!  I have tons of wool and felting books, but didn’t have this one! 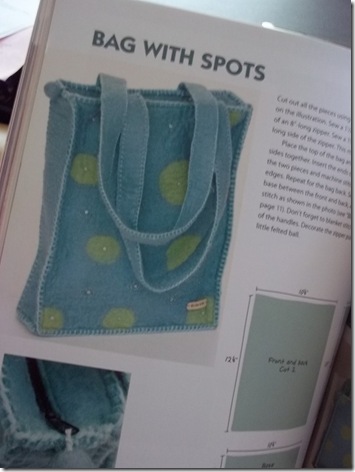 It is full of such great projects…even though the cover says it is for kids, I can see a purse made like this…and I am thinking one of my great nieces or nephew would like one of these horses. 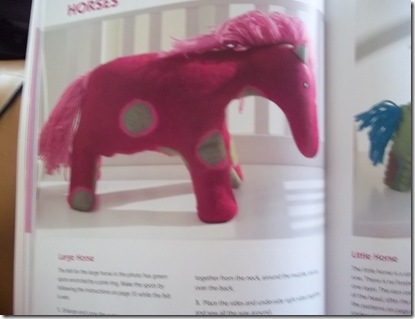 Plus this book showed a different way to wet felt, which I have never had much luck with.  I have tried to felt bars of soap, tried to make wool fabric, just never quite turns out right!  I do have this ginormous (probably this is less than half of the stash) quantity of wool roving from sheep and llama and alpaca. 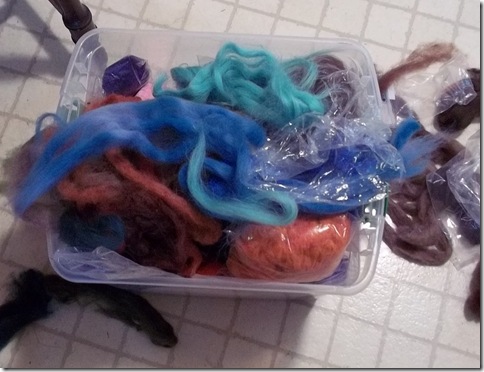 I got my stuff together…I used dish soap, an empty dish soap container for sprinkling water onto the dry wool roving, a container of water, two large towels—one on the floor under the table and one under the bubble wrap, and yes, bubble wrap. 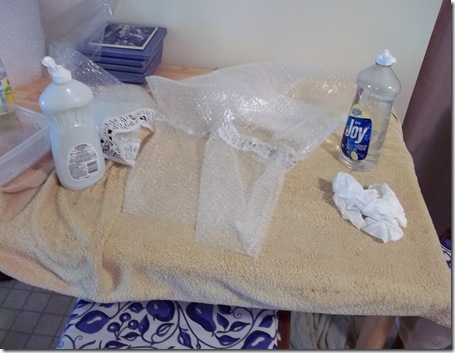 I laid my roving down on top of a piece of bubble wrap which was 24 x 24 inches (I taped two pieces together) with the first layer horizontal and the second layer vertical and then another layer horizontal.  I used three thick layers for the blues, pulling the roving apart as I laid it down. 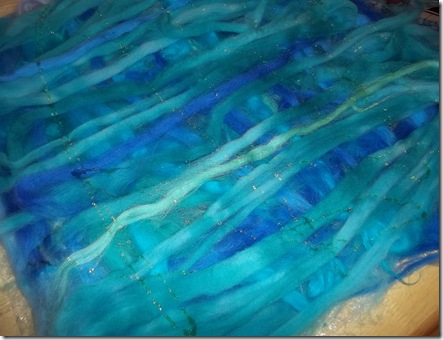 Next I sprinkled the dish soap on the dry roving… 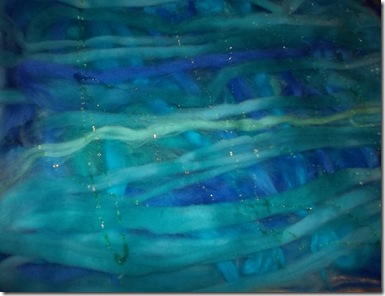 and then squirted water onto the roving. 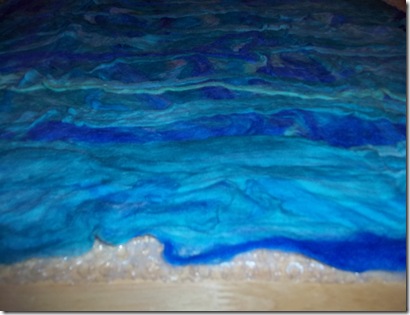 I patted the roving down until it started to stick to itself and then I laid another piece of bubble wrap on top of the roving. 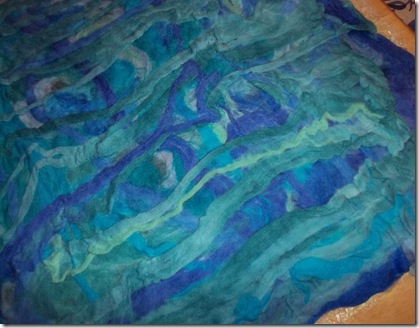 Then you roll it up like a jelly roll and start kneading and rolling it…I had to squeeze the water out of mine because I might have had had about a gallon too much on the roving! 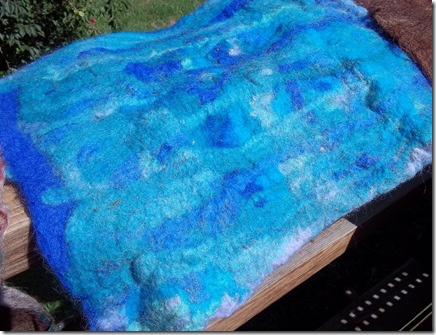 This is the finished product…definitely a success…the colors are so deep and vibrant.   And the roving I laid on top adds a lot of texture. 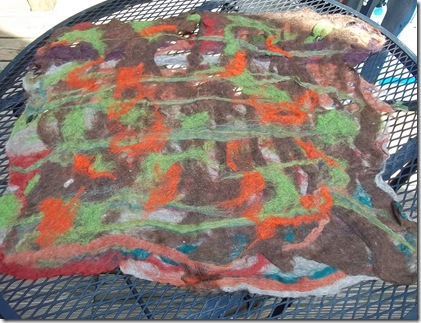 Ok, so that was a success…but this one was not.  I was hoping to make some leaves out of it, with nice fall colors. 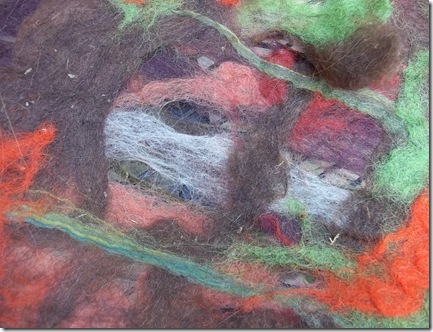 I made this one too thin I guess, my roving was thinner and I didn’t use as much of it.   I had a lot of trouble getting it to felt (might have just been the kind of roving I used) and I tried to repair some holes which left giant hunks of roving hanging out. 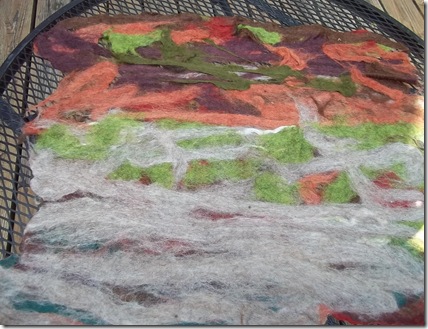 So one success and one not so much… 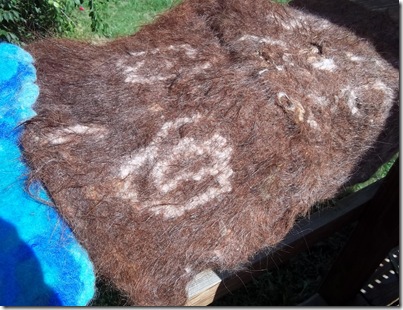 This piece is made from llama roving.   Lovely soft brown color.  I added some swirly designs on top in a cream color. 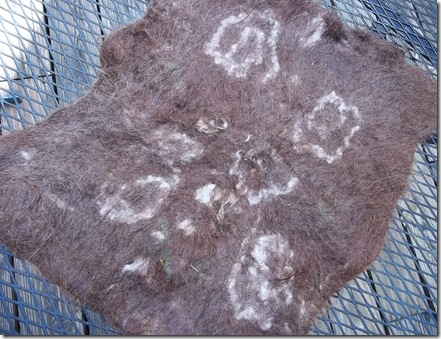 It was pretty coarse wool, so it kept getting thicker and thicker.  I decided I had had enough of hand felting it and it was already felted so I threw it in the washer to finish the job.  Take my word, resist this temptation if you try this!  It is close to an inch thick in spots and one half of it attached itself to the other half, so I had to cut it apart with a knife to show the design. Not so sure it will make the purse I had hoped! 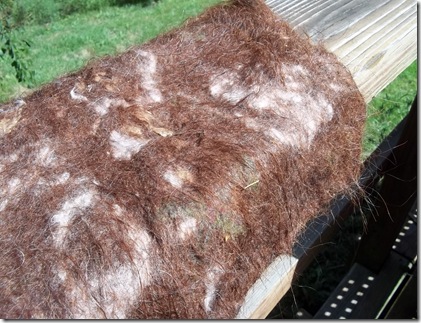 You can see how coarse the wool is here.  Looks more like the darn llama itself!  The jury is still out on whether or not this one is a fail! 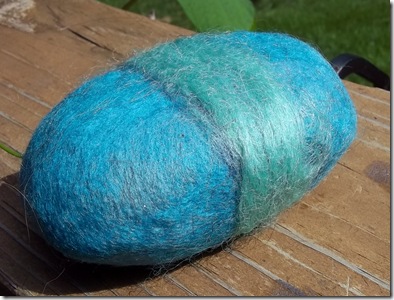 This project I know is a success!!  I felted a bar of soap.  I have never been able to do that before and I have tried it a dozen different times.   I used a blue/green and wrapped a length of sea foam green around the middle after it was half felted. 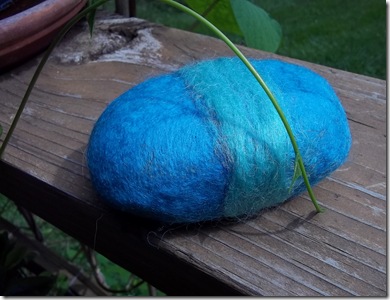 I am linking to these great parties!
Ellen
Posted by EllensCreativePassage at 7:35 PM

Oh wow Ellen! What great photos and an amazing insight into felting!

Wow, that is quite the process, I am impressed. It looks like a lot of work... Ok I admit it I am not naive at this sort of thing.... what do you do with felted soap? Found you at a little birdie told me!

that soap is beautiful!

I love the soap! We have been working on a felt garland for years for our Christmas tree. My children and I use the same process and make small balls. We thread them and each year the garland is a little bit longer. It will probably be my most treasured decoration in years to come, because of all the little hands that helped make it! I will have to remember to post about it! Thanks for this! Christie

Great project... I've always wondered how this was done and it turned out really nice! Thanks so much for linking this post to Share the Love Wednesday!
Mary

Always nice to get a new craft book : )
Felting looks like such a lot of fun and the blue is lovely...keep at it!

Hi! I spotted your bar of soap and I HAD to comment! I have done the same thing, but with rocks instead of soap - so they come out as something decorative too! (I actually did this with my 3.5 and 18 month old - it turned out really well, and we had loads of fun to boot!) :)

The soap bar turned out GREAT. I love the color. Wool is a wonderful media and versatile. I've done lots stuff and addicted. If you visit me you'll see some. Hope you'll explore more.
Terrie from Hong Kong

Impressive work. I have only ever felted knitted projects in my washing machine. It was fun to follow your process.
Visiting from Workshop Wednesday.

Wow, I've never seen wool felted before. I've heard of it, but you make it look so cool and fun. Maybe I need to try a new hobby. :)

Wow! You put a lot of effort into that! (I think I'll stick to knitting and felting in a washing machine for now, LOL.)

Your soap looks beautiful! Love the color and the detail of the wool. Thanks so much for sharing with the Pink Hippo Party.. can't wait to see what you share next!

I always wondered how felting worked- this turned out great! Thanks for linking up!

I would love to try felting!

Wow, what an awesome technique Ellen! I can't wait to see more.

I really don't know felting, but couldn't you just rewet the one you don't like, and add some colors you do like to it and fill in the gaps?
Hugs,

What a beautiful blue! I've never heard of these techniques! I think I like 'em!

Ellen, the blue came out beautiful, as did the bar of soap you made with it. Even though the second attempt didn't come out the way you had hoped, it's still lovely!

Thank you for sharing your creative process at Rook No. 17!

I've always been curious about this type of crafting! The result is beautiful! I love the felted soap you made! What a terrific gift that would be! Thank you for sharing your tips and linking up to WWWW! Hope I'll see you again today!

Hi Ellen. I've just begun felting myself and it is addictive! I'm using a machine though so I admire your ambition to wet felt. Love the soap and the colors -- are you going to use it? Blessings Terri www.morningdewdrops.typepad.com