I had a great chance to participate in Columbia’s first (but hopefully not last!) With heart Handmade market.  I think there were 12 crafters with booths set up in the street behind Shakespeare's, a pizza place, downtown. We had a great turnout, especially considering that the weather was not cooperating with us. 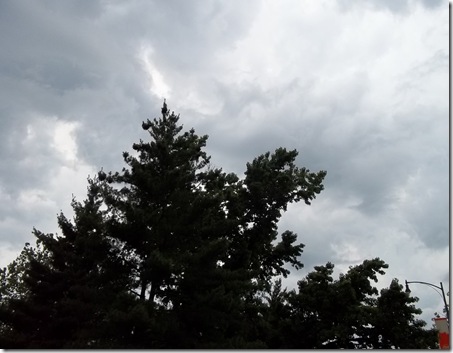 The forecast was for 50% thunderstorms, but we had several banks of dark clouds push through, and we had some wind, but really no rain until about 11:40.  Since it was over at 12 noon, I thought that wasn’t so bad! 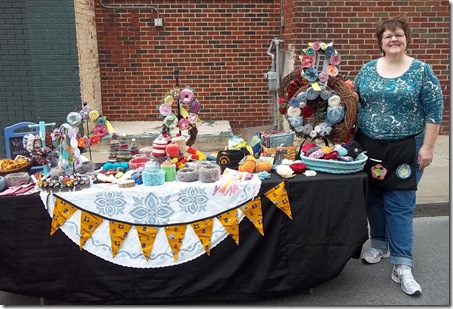 Laura from Along for the Ride snapped this pic of me and my booth.  Remind me to start working out!

The lady in the yellow sweater below had the highest heels on…my feet hurt just watching her walk! 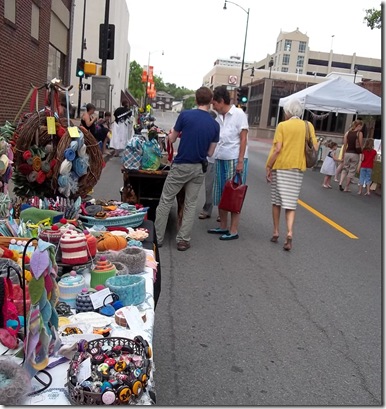 I think my table is too full…makes things harder to see. I have to say that my organization and set up is much more streamlined than it was at my last show in November.   I didn’t sell one wreath so I was kinda bummed about that.  But I sold other things, like a ton (OK, maybe not a ton, but at least 12) of potholders.  If I do say so myself, my potholders are the best and they are very popular.  I also give them for wedding gifts pretty much all the time! 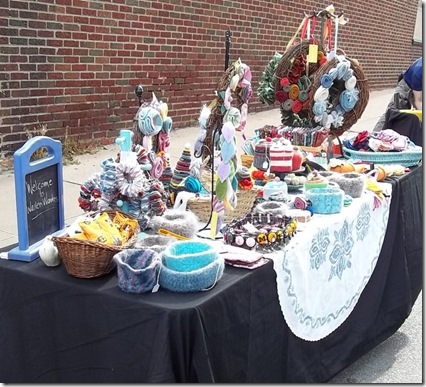 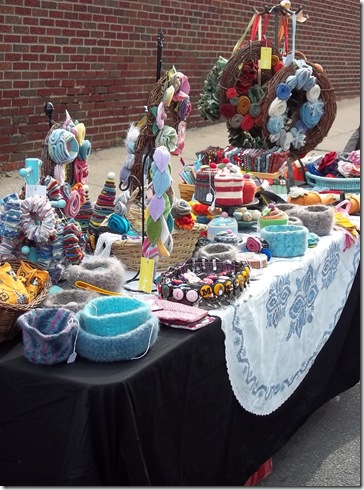 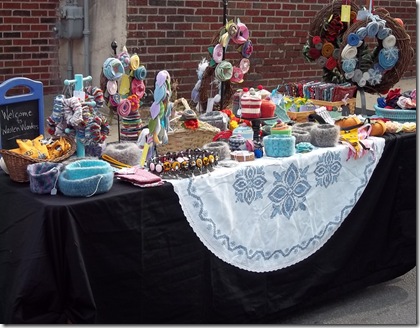 Pretty much immediately after I put that circular table cloth on the top of that black sheet, I didn’t like it…Oh well, next time, make a note! 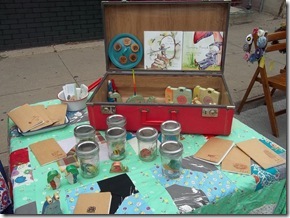 Chris from MamaRoots had the booth beside me…she had the cutest wooden toys which are kid safe, painted with non toxic water colors.  I had to buy some of them for baby shower gifts! 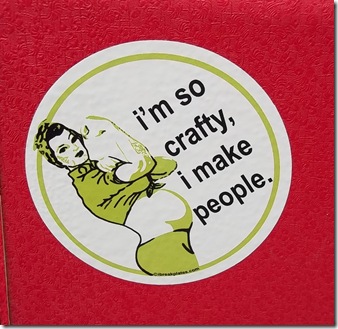 And she had the cutest sticker on her suitcase in her booth! And she was so kind to help me pack my car up when it started raining on us!  She just closed up her suitcase and was pretty much done! 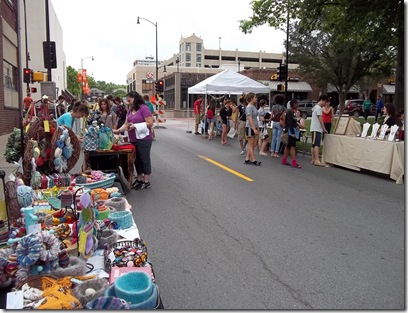 We had a slow stream of people (do those two words go together?) meandering through.  I was pleased with the turnout. 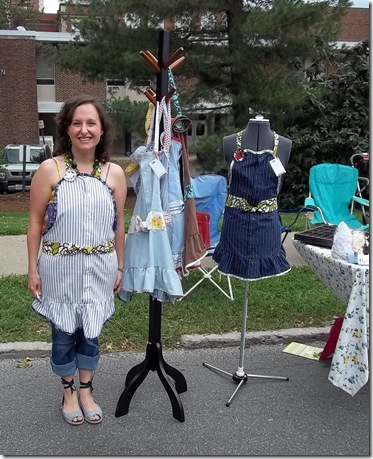 This is Stephanie from The Shirt Off His Back who makes aprons from men’s shirts.  They were soooo cute!!  Her etsy store is new and she hasn’t gotten any thing listed yet, but she is one to watch! 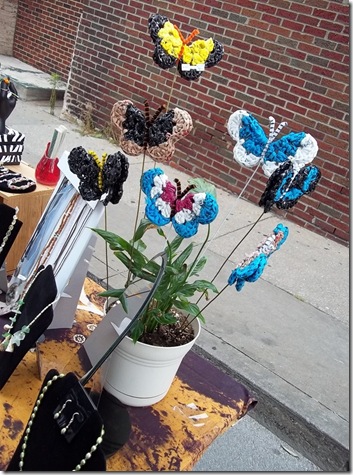 These two pics are from Pale Horse Studios and she had some awesome wool purses that were woven.  I loved them!  She also had woven plarn bags which were very cute!  And she had crocheted candle/drink/whatever holders from a jute looking yarn.  She also had some impressive butterflies made from plarn too! 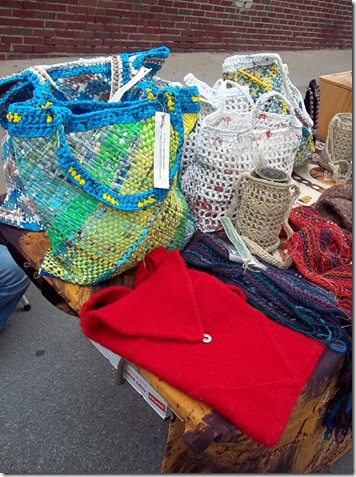 Love that red wool purse…did I mention that already?? 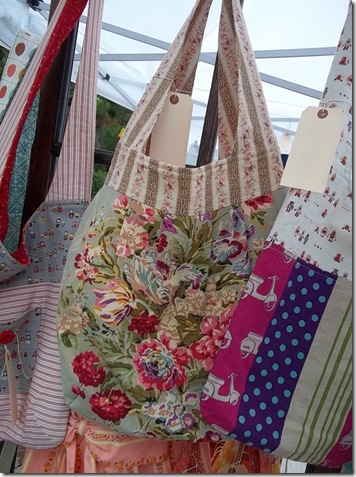 Sarah from Whimsy Vintage had the most beautiful purses made from imported fabrics and vintage fabrics. 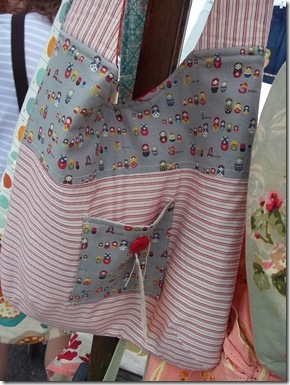 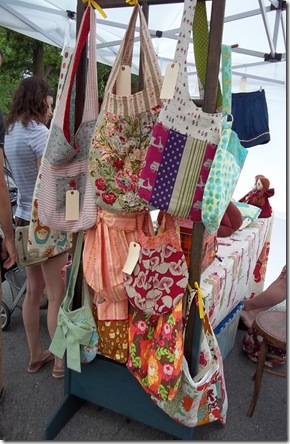 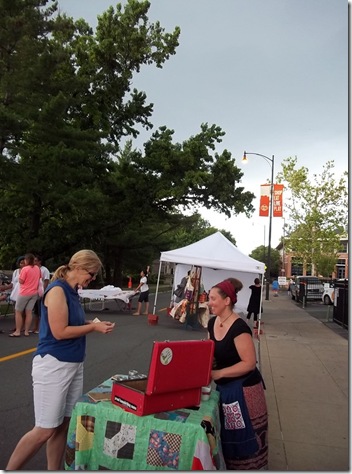 The sky continued to look rough, several large banks of dark clouds went over us with just winds, but really given the forecast, we were blessed with great weather! 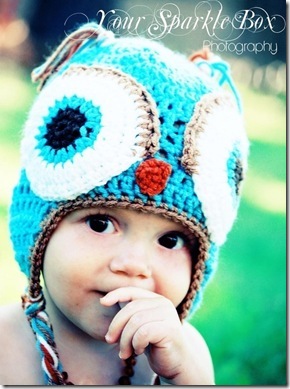 I didn’t take pics in her booth, but Brittany from Brittany’s Buttons had the cutest baby and kid hats…sock monkeys, owls, chicks, really cute stuff.  I debated on buying some of her hats for my baby gifts I needed to fix up… 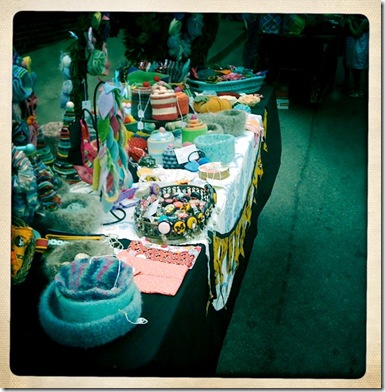 Here are a few from my iPhone Hipstamatic camera!  Love these kind of prints! 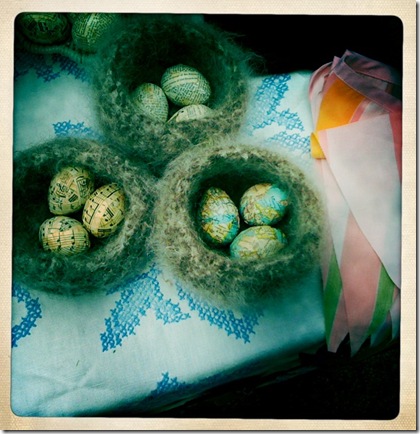 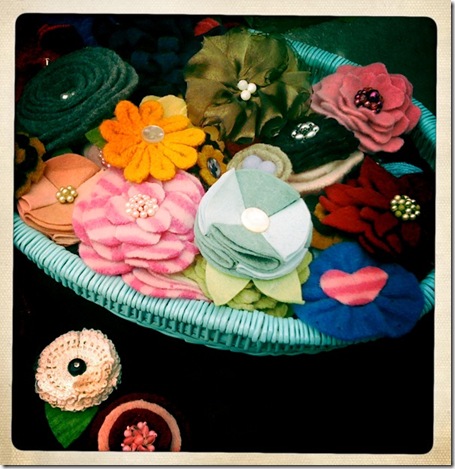 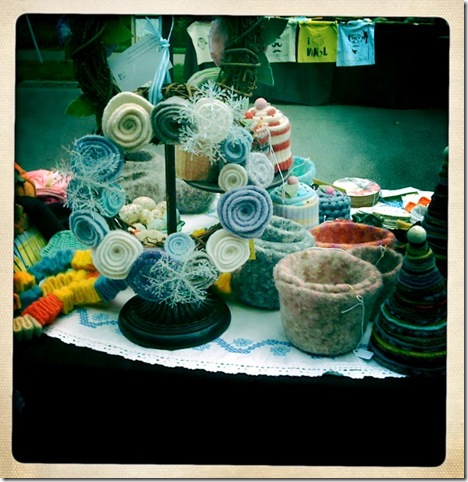 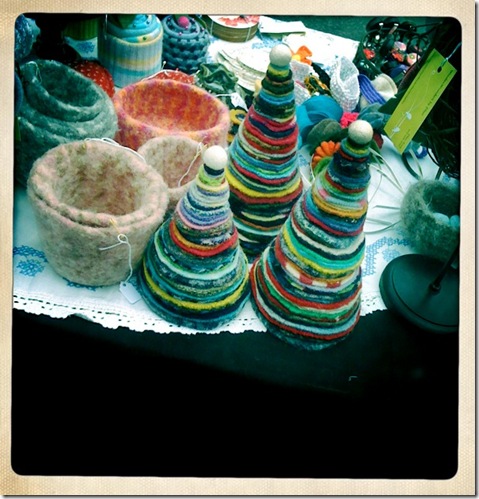 Hope you haven’t fall asleep after this post…if you have then wake up now!

There were lots of wonderful crafters here…I didn’t get pics and/or didn’t get to talk to the other crafters.

Posted by EllensCreativePassage at 1:51 AM